Listen to the pre-match thoughts of James McKeown and manager Paul Hurst.

In today’s packed edition, goalkeeper James McKeown says that "we are not going down without a fight," and Town boss Paul Hurst looks ahead to Saturday’s trip to Bradford City and brings us the very latest team news.

Mariners On The Road To Bradford Today


The Mariners travel to Yorkshire this Saturday as they look to maintain their unbeaten run on the road to Bradford City for a 3pm kick-off.

Grimsby Town's eight-match undefeated run came to an end as they were beaten by Bradford City.

A single goal from defender Anthony O'Connor three minutes before the break proved enough for the hosts to claim all three points.

But with the Mariners still well and truly in what had been a game of few real chances, the turning point came at the very end of the first half when Stefan Payne was sent off for head-butting team-mate Filipe Morais.

Town's ten men looked for a way back into the contest after the interval but were unable to find a breakthrough and remain seven points adrift of an escape from League Two's relegation zone.

Three changes were made to the Grimsby starting line-up after Easter Monday's draw with Cheltenham Town, as Morais, Giles Coke and George Williams came into the XI and Luke Waterfall, Harry Clifton and Lenell John-Lewis dropped out.

Goalkeeper James McKeown was protected by a defence of Luke Hendrie, Elliott Hewitt, Rollin Menayese and Sam Habergham, while Morais, Coke and Williams were joined in midfield by Jay Matete and Payne lined up alongside James Hanson in attack.

Waterfall, Clifton and John-Lewis were all named on the bench, where they were joined by Ollie Battersby, Luke Spokes, Julien Lamy and Matt Green.

Bradford were looking for a victory which could take them back to the fringes of the play-off positions, depending on other results.

Former Town forwards Andy Cook and Billy Clarke were named in their starting XI, while fellow ex-Mariners striker Charles Vernam was among the substitutes for Mark Trueman and Conor Sellars' side. Another familiar face was goalkeeper Richard O'Donnell, who had a loan spell at Blundell Park in 2010.

The home side had the better of the opening stages, with the ball mostly in the Mariners' half as Bradford looked for an early breakthrough.

Town's first attack of note came on seven minutes and led to Williams shooting from distance, although his low effort lacked power and went through to O'Donnell.

A cross from Clarke on the right was cut out by Hendrie before it could reach Cook, then a quick break led to a corner at the other end but Williams could not connect with the low ball from the flag. Town kept possession though and Morais crossed from the left for Hanson, who headed wide.

Another corner came after Williams was stopped following a pass from Payne but this time, the flag-kick was cleared.

A foul by Hewitt on Cook gave the home side a free kick midway inside the Town half on 15 minutes. The delivery from the left was headed away by Menayese and a follow-up header went out for a goal kick.

Payne won a free kick inside the centre circle five minutes later, giving the Mariners an opportunity to get the ball into the danger zone. Menayese won the initial header but after the ball bounced around the penalty area, it was eventually cleared.

Another Town corner came on 23 minutes and led to a chance as Habergham's delivery was met by Coke but he could only head over the bar.

At the other end, a long throw from Clayton Donaldson was hooked clear by Coke, before a promising Town attack led to Hendrie crossing from the right but nobody could turn it towards goal.

McKeown got down to stop a shot from Gareth Evans after the midfielder let fly from the edge of the penalty area on 34 minutes, then a foul by Coke on Finn Cousin-Dawson gave the home side a free kick on the right a minute later. The ball from it broke for Cousin-Dawson but his shot was blocked and Payne cleared.

Habergham was shown the first yellow card of the game after bringing Cousin-Dawson down on the Bradford right but this time, Evans' free kick was headed clear by Hendrie.

A cross from Morais on the Town left was flicked away for a corner before the ball could reach Hanson at the far post but Habergham's delivery from the flag was caught by O'Donnell.

Habergham then did very well at the other end to beat Cook to a cross from Clarke on the left and ensure the only damage was a corner.

But after the corner was half-cleared, Bradford worked the ball back and this time, they made the pressure count. A cross from the left flicked off the head of Matete and fell for Anthony O'CONNOR, who had the simple task of finishing from close range to open the scoring.

Williams was booked for a foul after losing possession in front of the dug-outs but the free kick did not lead to a chance in front of goal.

One added minute was played at the end of the first half an with no further opportunities for either side, Bradford went in at the interval with the lead.

But Town would be forced to play the second half with just 10 men after Payne was sent off in crazy circumstances after the half-time whistle. The striker had a dispute with Morais after a pass went astray and after the half came to an end, head-butted his team-mate. Payne quickly retreated to the dressing room but was called back out by the referee, who brandished the red card.

Morais also did not appear for the second half as he was replaced by John-Lewis before the restart, with Clifton and Waterfall also coming on for Williams and Habergham as manager Paul Hurst made a triple substitution in a bid to force a way back into the game.

Donaldson won a corner for Bradford two minutes in but the hosts were unable to cause any serious problems from it.

It was a low-key opening to the half, with the home side looking to keep possession and patiently build up attacks.

A cross from Evans on the left was cleared, before Cousin-Dawson won a corner on the right but from it, Cook sent a header straight at McKeown.

A foul on Clifton gave Town a chance to launch a rare attack and the free kick led to a throw-in on the right. Hewitt's long throw was flicked on by Waterfall and then put behind for a corner, which was headed clear. The Mariners kept possession and a ball from the right fell for Waterfall at the far post but he could not send it towards goal.

John-Lewis fired over the bar after a run through the middle by Clifton on 66 minutes as Town looked to be growing in confidence.

Vernam and Danny Rowe replaced Clarke and Cook as the home side freshened up their attack with a little under 20 minutes to go.

Paudie O'Connor was booked for a foul on Hanson soon afterwards but Hendrie's resulting free kick was poor and sailed out at the far post for a goal kick.

A good chance for Bradford to double their lead came on 72 minutes when Vernam found Connor Wood inside the box but after taking a touch, the winger lifted his shot against the top of the bar and out for a goal kick.

Clifton then drew a good save from O'Donnell at his near post after blasting a shot from a narrow-angle as Town kept searching for a way back into the game.

Donaldson was shown the yellow card for a foul on Menayese and after the free kick came back to Hendrie, he played the ball to Clifton on the left. He then crossed for Hewitt but his flicked header went wide.

Ollie Crankshaw replaced Donaldson and the substitute almost had a chance when Vernam played a low ball across the six-yard line, although Menayese got to it first to slide it away for a corner.

Spokes came on for Coke in the Town midfield with eight minutes to go, before a cross from Wood was headed clear by Hendrie.

The first action of note for Spokes was to take a free kick from 35 yards out but it was dealt with by the home defence.

Another free kick came in a similar position soon afterwards, this time for a foul on Matete, but Spokes' ball had too much on it and Hanson could only divert it behind for a goal kick.

Kian Scales replaced Elliot Watt for the hosts on 86 minutes and a Bradford corner came two minutes later but was headed away from goal for a Town throw-in.

Spokes fired a first-time shot well over the bar from 20 yards in the last minute of the 90 and the Mariners were given three added minutes to salvage something from the game.

But with no further chances, all three points stayed in West Yorkshire and Town must now regroup ahead of next Saturday's home clash with promotion-chasing Bolton Wanderers.

Next Up: Bolton Wanderers (H)

Mariners On The Road To Bradford Today


The Mariners travel to Yorkshire this Saturday as they look to maintain their unbeaten run on the road to Bradford City for a 3pm kick-off. 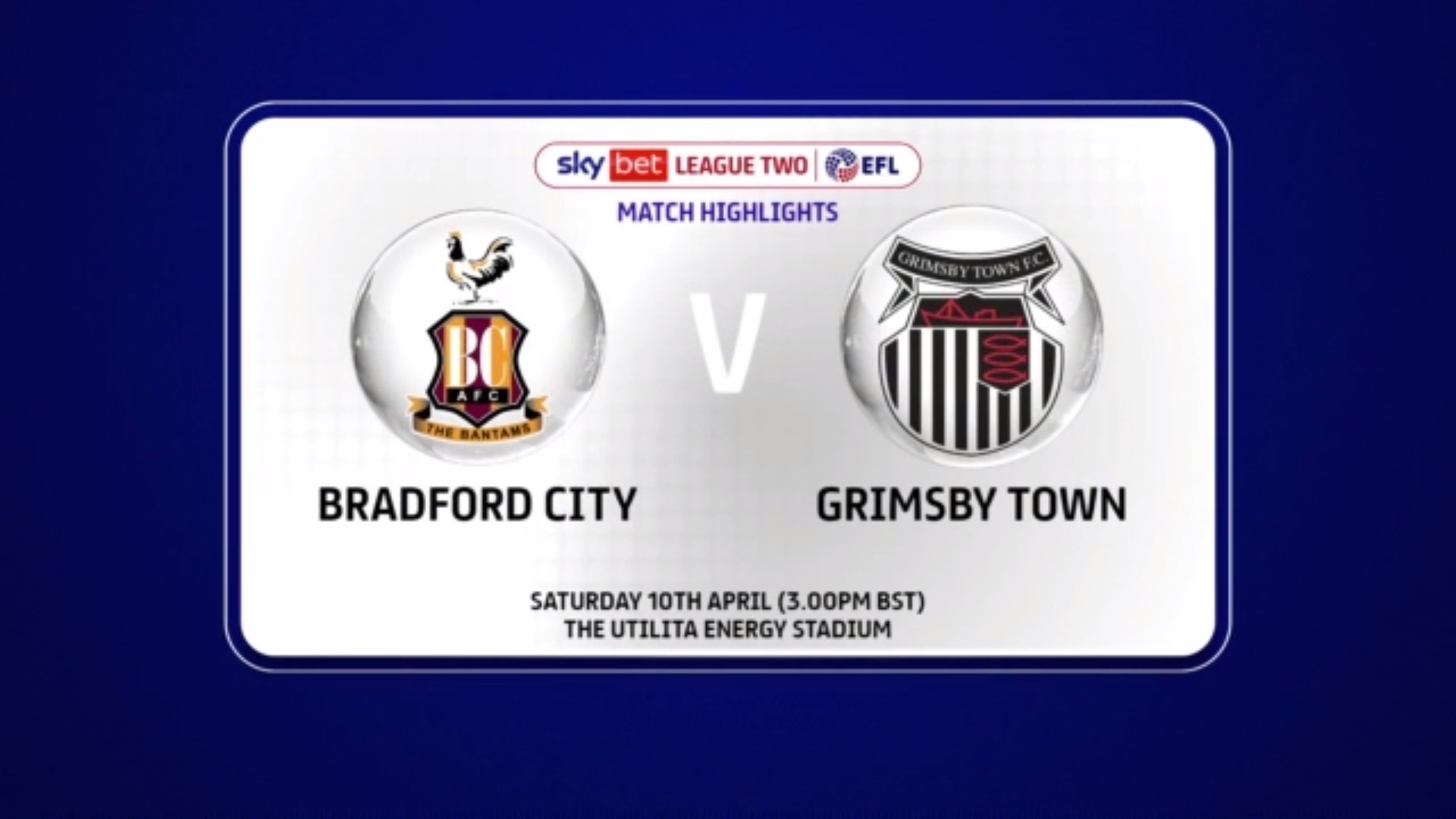 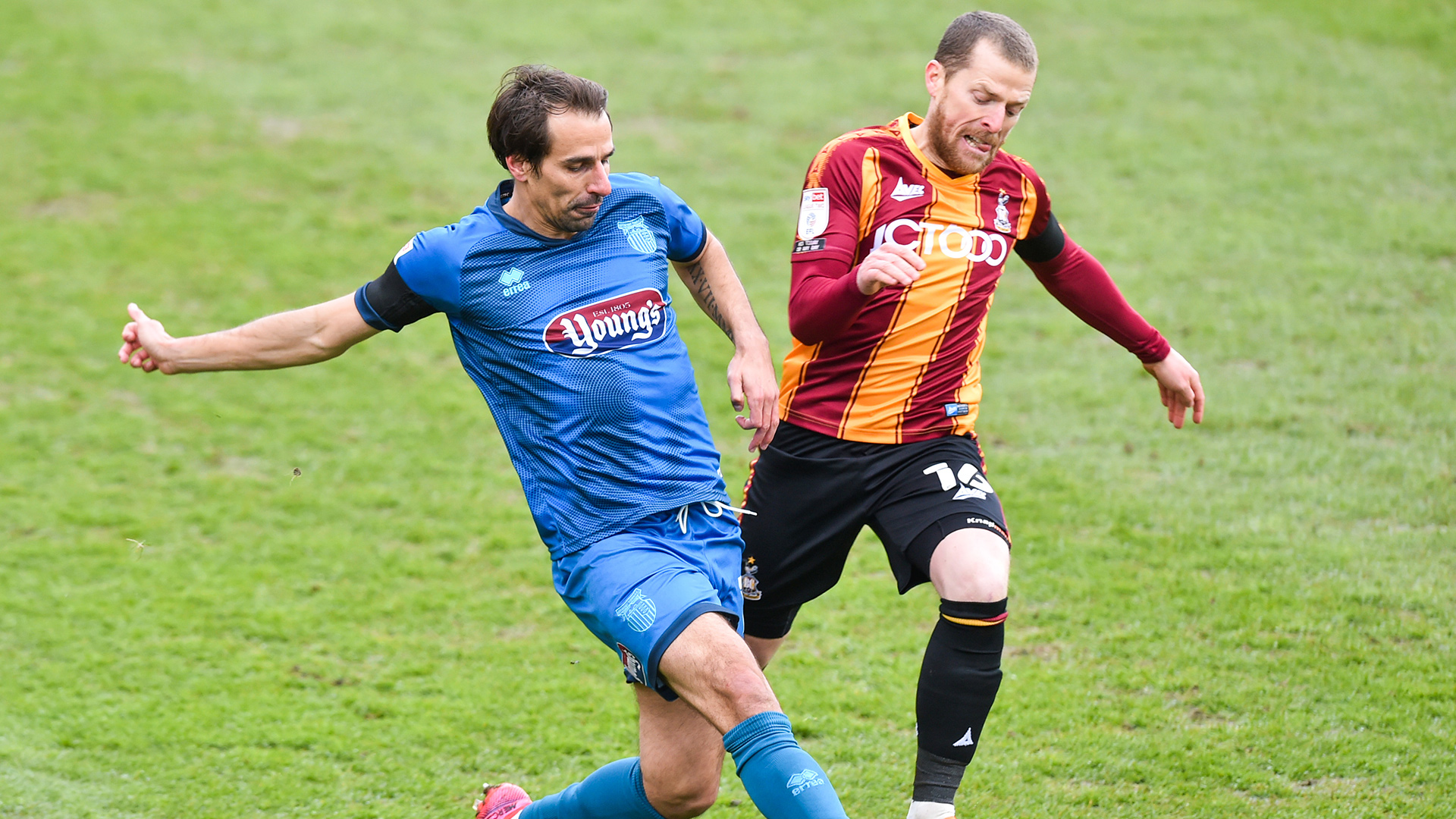