Listen to the pre match thoughts of Paul Hurst and defender Elliott Hewitt.

Speaking about Town's chances of beating the drop into the National League, Hurst told iFollow: “While there’s a mathematical chance, we’ll go to try and keep that - admittedly very slim - chance alive.

“Until such point that changes, then I’ll have a little think about it, but I don’t want to be totally thinking like that.

“I’m not just going to give up on it because it looks near enough impossible. As I’ve said from the start, I don’t want any team to go out there and roll over.

“We have to have a bit of pride, and I guess from my point of view you see the characters within that, who’s going to keep fighting no matter what the circumstances are going into the game.”

Listen to more from Paul and Elliott Hewitt - only on iFollow Mariners.

Grimsby Town's fight to stay in League Two goes on after a fantastic victory over Oldham Athletic at Boundary Park.

The Mariners fell behind on the half-hour when Conor McAleny opened the scoring for the hosts but they were back on level terms within six minutes as Matt Green, who only started the game after James Hanson was injured in the warm-up, made it 1-1.

Town were the better side after half-time and created several chances before Jay Matete scored with 10 minutes to go to complete the turnaround and seal three priceless points.

And as Barrow lost at Tranmere, the gap to the safety zone was narrowed to six points with three games remaining.

Town boss Paul Hurst made two changes to his starting XI following the home defeat by Morecambe in midweek, with Luke Waterfall and Giles Coke returning in place of Sam Habergham and Julien Lamy.

Harry Clifton and Evan Khouri operated as wing-backs as Luke Spokes, Matete and Coke started in midfield, while Hanson was named in attack on the teamsheet but a late change meant it was instead Green who lined up alongside Lenell John-Lewis.

Jake Eastwood and Sean Scannell both returned to the bench, where they were joined by Lamy, Luis Adlard and Ira Jackson Jr as the Mariners named just five of the permitted seven substitutes.

Oldham came into the game as the division's leading scorers, although they had also conceded more goals than any other team in League Two.

They named an unchanged line-up from Tuesday's away victory against Harrogate as they looked to continue a strong run of late-season form.

Oldham had the first chance of the game as Nicky Adams fizzed a cross over from the left and Waterfall turned it towards his own goal but McKeown dived to make the stop.

Callum Whelan fired straight at the goalkeeper from 20 yards on four minutes, before Town's first chance to attack saw Spokes float a free kick into the box from the right but Menayese's header went through to home keeper Laurie Walker.

A foul by Coke saw him receive the first yellow card of the game on six minutes but the hosts were unable to create any significant danger from the resulting free kick.

A long throw from the Oldham right led to a corner and it turned into another when a cross was blocked by Matete. This time, the danger was cleared.

The home side attacked again down the left on 10 minutes and a cross from Adams fell for Harry Clarke but his header was caught by McKeown.

A great run by Hewitt down the right soon afterwards eventually led to a Mariners free kick in a dangerous position when Spokes was fouled 25 yards out. Spokes' shot from it bounced off the Oldham defensive wall and out for a corner, which was caught by Walker.

Adams won a corner on the home left on 18 minutes but the delivery from it was flicked clear by Waterfall, then good work by Spokes on the left saw him reach the edge of the penalty area, although Dylan Bahamboula was able to see the ball out for a goal kick.

McAleny curled a shot over the bar at the other end as Oldham continued to look the more dangerous of the two sides at the midway point of the half.

Another chance looked to be on its way when Bahamboula sent McAleny clear down the left but Hewitt did well to get back and force the attacker wide.

A Spokes free kick from the Grimsby left was cleared and a long throw from Hewitt soon afterwards also failed to cause a problem.

Town looked to be coming back into the game but when the deadlock was broken on the half-hour, it was Oldham who took the lead. Matate lost possession to Alfie McCalmont in midfield and he played a through-ball for McALENY, who went clear and slotted past the advancing McKeown.

The Mariners' response saw John-Lewis show good persistence to chase the ball down and get a cross over from the right, before a foul by Davis Keillor-Dunn brought a free kick midway inside the Oldham half. From it, the ball broke for Menayese but he could not turn it into the net from close range and the hosts cleared.

But it was not long until Town were back on level terms, as GREEN cut in from the left and let fly with a shot from 25 yards which beat Walker and found the bottom corner of the net to make it 1-1 with 36 minutes on the clock.

John-Lewis fired over the bar from 20 yards, before Whelan was booked for a foul on Khouri inside the Grimsby half.

One added minute was played at the end of the first half and Oldham had a final opportunity to create a chance to regain their advantage with a late corner but the ball from the flag beat everybody and the scores remained level at the break.

No changes were made before the restart and a foul by Khouri on Clarke gave the home side a free kick on the right three minutes in. Whelan's delivery from it was too close to McKeown though and the keeper made a comfortable catch.

A foul on John-Lewis at the other end then brought a free kick for the Mariners. Matete found Green from it and the striker won a corner, which was headed clear as far as Clifton, whose shot was tipped over the bar by keeper Walker. This time, it led to Hewitt sending the ball off-target.

Green sent a cross over from the right as Town's positive start to the half continued but the ball was just too far ahead of John-Lewis at the far post and he was penalised for a foul.

John-Lewis headed off-target after another good attacking move which had seen Clifton cross from the right, then a corner came at the other end after a challenge by Menayese on Clarke. The ball from the flag was cleared by Clifton.

Whelan was replaced by Ben Garrity, Marcel Hilssner came on for Keillor-Dunn and Marcus Barnes was sent on in place of Bahamboula as Oldham made a triple-substitution on 57 minutes.

Barnes' first involvement saw him beat Menayese down the home right but when he pulled the ball back, Clifton did well to stop it being tapped into the net and instead, ensured the only damage was a corner.

Another corner seconds later got a deflection which took it across the six-yard box but nobody could get on the end of it and a foul on Menayese relieved the pressure.

Adams won another corner on 61 minutes and it led to a chance as the ball form the flag was met by Garrity but his header went just over the bar.

The Mariners then created a golden opportunity to take the lead when John-Lewis played the ball through for Spokes but with just Walker to beat, the midfielder could only slide his low shot past the far post.

A foul on Matete on 66 minutes brought a free kick in a dangerous, central position but again, Spokes could not make it count as his attempt from 25 yards sailed over the bar for a goal kick.

Dylan Fage came on in place of Kyle Jameson as the hosts made a fourth change on 70 minutes, with the Mariners the better side since the interval.

Fage's first action saw him get down the right and send over a low cross but Waterfall was in the right place to clear it over his own bar for a corner, which was cleared by Clifton.

Seconds later, Town launched a counter-attack through Green after the referee played an advantage following a foul on Khouri. The striker looked for Matete through the middle but the ball was too far ahead of him and it went through to Walker.

Menayese was booked for a foul on Barnes but the resulting free kick was cleared after the ball was played into the penalty area by Hilssner.

Clifton created a chance for himself after getting the ball midway inside his own half and setting off on a brilliant run which took him into the Oldham box, although he was forced slightly wide and his shot was blocked for a corner.

The Mariners finally made their breakthrough with 10 minutes to go as they completed the turnaround to go 2-1 up. A pass from Hewitt found MATETE and after space was created for the midfielder to go forward, he powered a fantastic shot into the top corner of the net from 20 yards.

Oldham's response saw a long throw headed behind by Waterfall for a corner but the hosts were unable to turn it into a chance in front of goal.

Town looked like they would have to see out the last three minutes of the game with just 10 men after Menayese was wrongly shown a second yellow card after a foul by Khouri but after an intervention by the fourth official, the decision was reversed and Khouri was booked instead.

A header from McAleny was deflected wide for a corner by McKeown as the fourth official signalled four added minutes to be played, with the keeper then catching the ball from the flag-kick.

Green was replaced by Jackson in Town's first substitution as they aimed to hold onto their precious advantage, with Oldham attacking in search of a last-gasp equaliser.

A cross from Fage on the right was cleared by Matete, before a final chance for the home side came with a free kick, 25 yards from goal. Hilssner missed the target from it and with that, the points were Town's.

The victory was a deserved reward for another committed performance and it means the Mariners remain in the race to avoid relegation to the National League.

They must now win again in their next game on Tuesday, when they make the long trip to Exeter City.

Next Up: Exeter City (A) 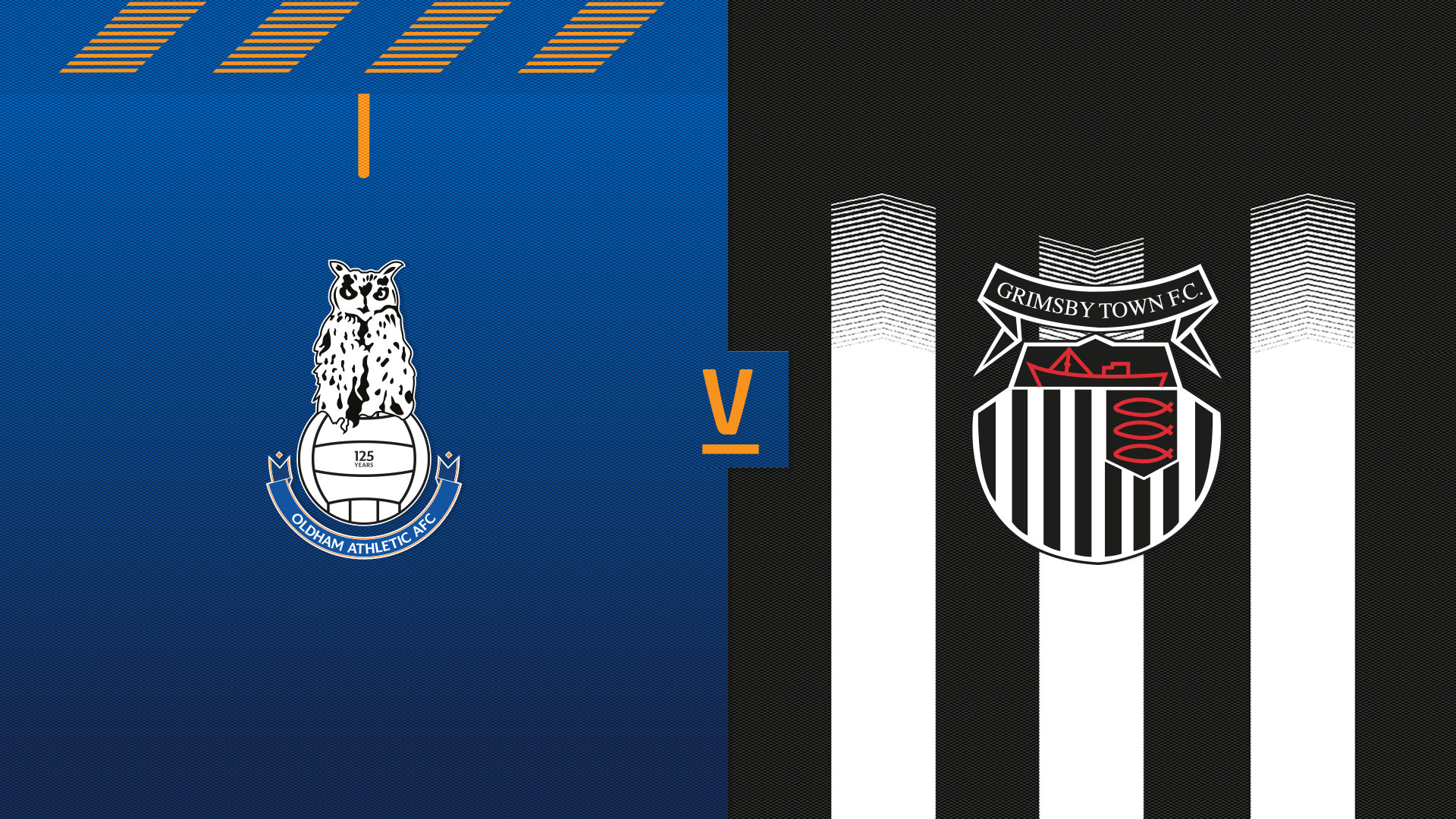 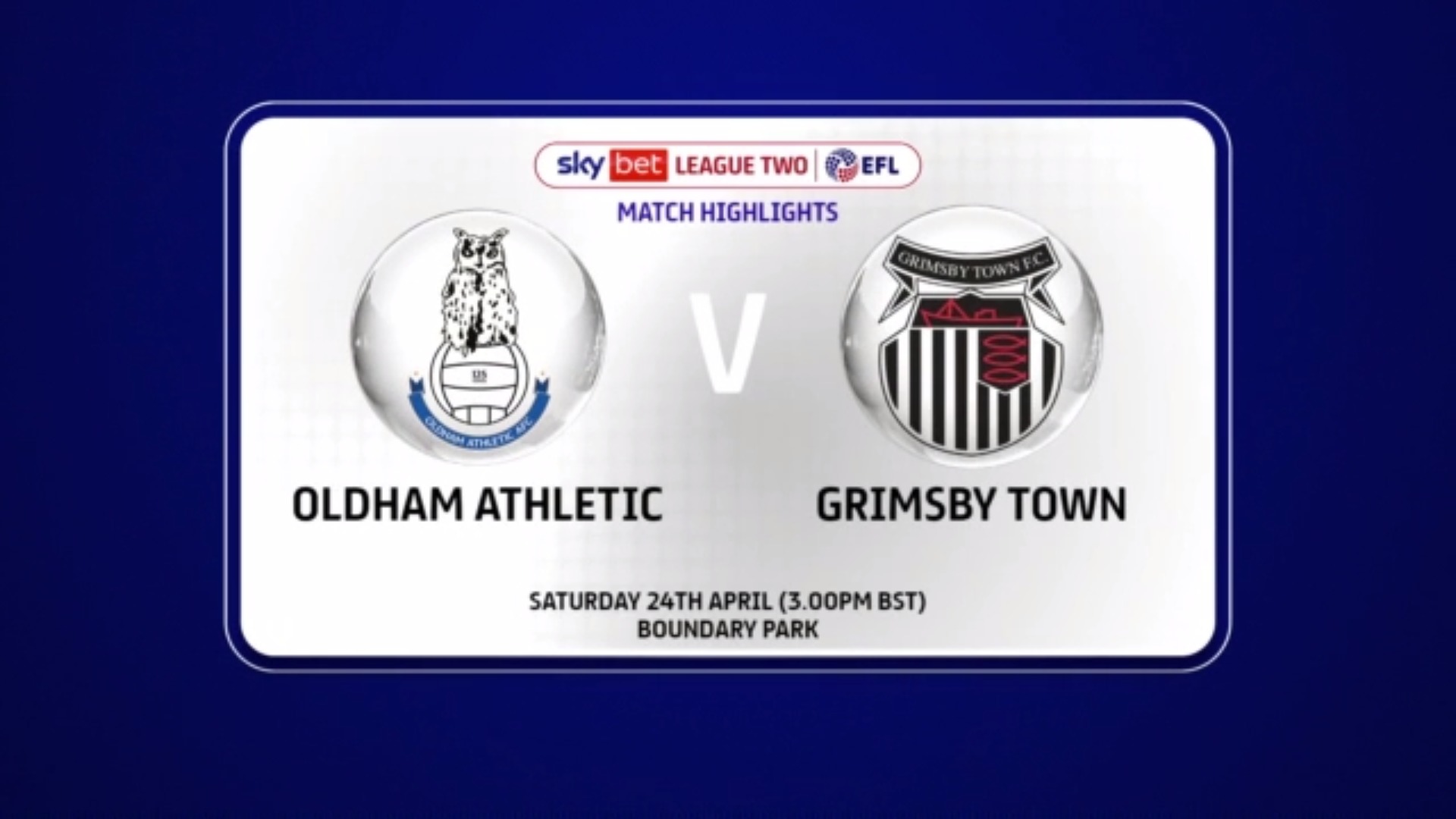 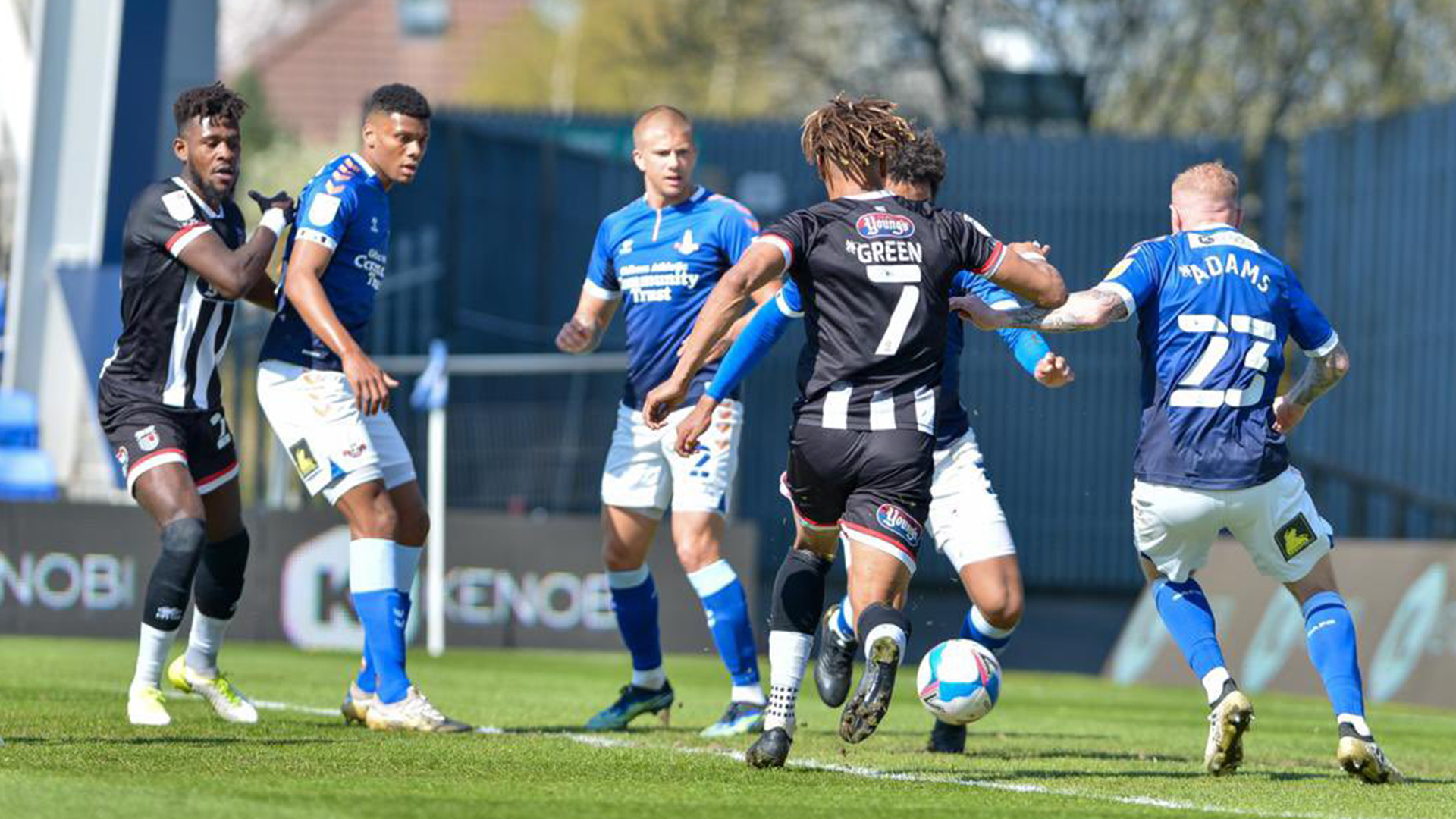