Paul Hurst answers all of the rumours and looks forward to Saturday's clash with Stevenage.

Listen to Paul Hurst ahead of Saturday’s clash with Stevenage at Blundell Park. Paul has the latest team news, Lenell John-Lewis, and the latest on Giles Coke – the midfield player from Hereford United.

The Town boss also gives us his thoughts on Monday, the day when the transfer window slams shut.

How to watch the game

The only way to watch Saturday's game is with iFollow Video Match Pass.


The Mariners return to action this today as we face a crunch tie with Stevenage at Blundell Park for a 3pm kick-off.

The Mariner Returns This Afternoon For The Visit Of Stevenage


Our award-winning match day programme, The Mariner returns this afternoon for the visit of Stevenage to Blundell Park.

Grimsby Town suffered last-minute heartbreak as they were beaten by Stevenage at Blundell Park.

Substitute Stefan Payne struck deep into stoppage time on his debut to cancel out Elliott List's opener and seemingly rescue a point for the Mariners.

But the visitors had other ideas as they hit back straight from the restart, with Matty Stevens grabbing the winner with seconds left to play.

Town produced a much-improved first-half performance and looked to be the better side but Stevenage took the lead against the run of play when List scored three minutes before the break.

After half-time, the Mariners found it more difficult to create good chances until Payne's late goal brought them level, although the away side had the final say to move four points ahead in the battle to stay in League Two.

Four changes to the starting XI were made as Grimsby returned to action for the first time since last Saturday's defeat at Scunthorpe United, with new loan signing Idris El Mizouni coming straight in for his debut after making a temporary move from Ipswich Town.

Payne was named among the substitutes after joining the Mariners from Tranmere Rovers earlier in the week and he was joined on the bench by Preston, Hewitt, Wright, Sam Russell, Luke Spokes and George Williams.

Stevenage began the game one point and one place ahead of their hosts in the league table, with both sides desperate for a victory which would ensure they did not end the day in the relegation zone.

The visitors started brightly, looking to keep the ball and build up attacks, with an early cross from Ben Coker on the left headed clear by Waterfall.

Midfielder Arthur Read let fly with a shot from distance on nine minutes but it did not trouble McKeown as the ball flew wide.

A foul by Menayese on striker Luke Norris gave the away side a free kick in a dangerous position on the left but again, it caused no serious concerns as Jack Aitchison's delivery sailed out at the far post for a goal kick.

Town won the first corner of the game on 15 minutes but it was eventually cleared after Rose and Jackson had worked a short routine.

A foul on Rose gave the hosts a free kick but the midfielder's delivery into the penalty area was headed away, before a cross from Waterfall on the right went out for a goal kick.

Norris was caught offside as he met a ball over the top, before a Rose free kick from halfway went out for a goal kick after Waterfall had got his head to the ball.

A shot by Norris was blocked for a Stevenage corner after a good attacking move down the left but Read's ball from the flag was headed clear by Waterfall.

Soon afterwards, a cross from Hendrie on the Town right was cut out but the Mariners retained possession and Rose fired wide from 25 yards.

Fleetwood loanee Matete created another chance for himself seconds later, running from midfield and drifting to the right before shooting just wide of the far post.

Town won a corner four minutes before the break and Rose's delivery was half-cleared before a shot by Matete was blocked at the edge of the box.

The Mariners had been the better side for most of the contest so far and had played plenty of good football.

But when the deadlock was broken on 42 minutes, it was Stevenage who took the lead against the run of play. A through-ball from Aitchison was not dealt with by Menayese and the ball ricocheted for LIST, who raced clear before slotting past McKeown from 18 yards.

One added minute was played at the end of the half and despite a much-improved performance, the Mariners had failed to make their pressure count and instead, found themselves behind at the interval.

No changes were made before the restart and Stevenage were the first to create danger when List crossed from the right but the ball bounced off the bar and went away from goal.

A delivery into the box from Pollock at the other end proved to be too far ahead of Hanson and it went out for a goal kick.

A cross from Hendrie on the Town right was deflected for a corner but Rose's delivery was well-defended as Stevenage cleared.

At the other end, McKeown had to race off his line to make a good block and deny List, with Waterfall getting the loose ball away for a corner.

The visitors won a free kick on the left when Waterfall fouled Norris but they were unable to make the most of it as Waterfall made amends by heading Read's delivery away for a corner, which eventually resulted in the ball going through to McKeown.

A foul on Matete gave Town an opportunity to get the ball into the danger zone but again, Rose's ball was dealt with by the away defence.

Romain Vincelot crossed from the right as Stevenage launched another attack on 61 minutes but the ball was headed away by Waterfall for a corner, which was caught by McKeown.

Payne was sent on for his Town debut as he replaced Jackson in the game's first substitution two minutes later.

A foul on Habergham resulted in a Grimsby free kick just inside the Stevenage half and Rose's delivery eventually broke towards Hanson but he was unable to send it back towards goal and the visitors cleared their lines.

The away side made a double-substitution on 68 minutes as Danny Newton and Stevens replaced List and Norris up front.

Vincelot was shown the first yellow card of the game on 70 minutes after bringing Matete own as he looked to make progress through the middle. The free kick was not fully dealt with by the away defence but the offside flag went up against Payne as he lifted a first-time shot over the bar.

McKeown was booked after handling the ball outside the left edge of his penalty area but the resulting free kick caused no real problems as Stevens fired over the bar after a shot from Vincelot was blocked.

A second double-substitution by Stevenage boss Alex Revell saw Joe Martin and Jack Smith replace Aitchison and Read with 15 minutes to go, before Newton headed wide from another free kick.

The visitors were now getting on top as the Mariners struggled to create chances and Smith sent a shot wide of the near post from 20 yards.

Habergham did well to beat Charlie Carter down the left but the away side got the ball clear for a throw-in.

Preston came on in place of Habergham and Spokes replaced Menayese in a bid to change the game with 80 minutes on the clock.

A foul by Carter on Preston gave the Mariners a free kick near the left corner flag on 86 minutes but they were unable to turn it into a chance in front of goal.

Town kept pushing forward and a low effort by Matete was blocked for a corner but again, they were unable to make it count as Spokes volleyed over the bar.

Four added minutes were played as Town looked to get forward in search of a vital goal to rescue a point.

But the game had one final, cruel twist for the Mariners as their joy turned to heartbreak within seconds of the restart. The ball was played over the defence and STEVENS popped up to poke it past McKeown and snatch all three points and Stevenage's first away win of the season.

It was a hammer blow for Town after it looked like they would take something from the game and they must now regroup ahead of their next game, away to Newport County on Saturday.

Next Up: Newport County (A)


The Mariners return to action this today as we face a crunch tie with Stevenage at Blundell Park for a 3pm kick-off.

The Mariner Returns This Afternoon For The Visit Of Stevenage


Our award-winning match day programme, The Mariner returns this afternoon for the visit of Stevenage to Blundell Park. 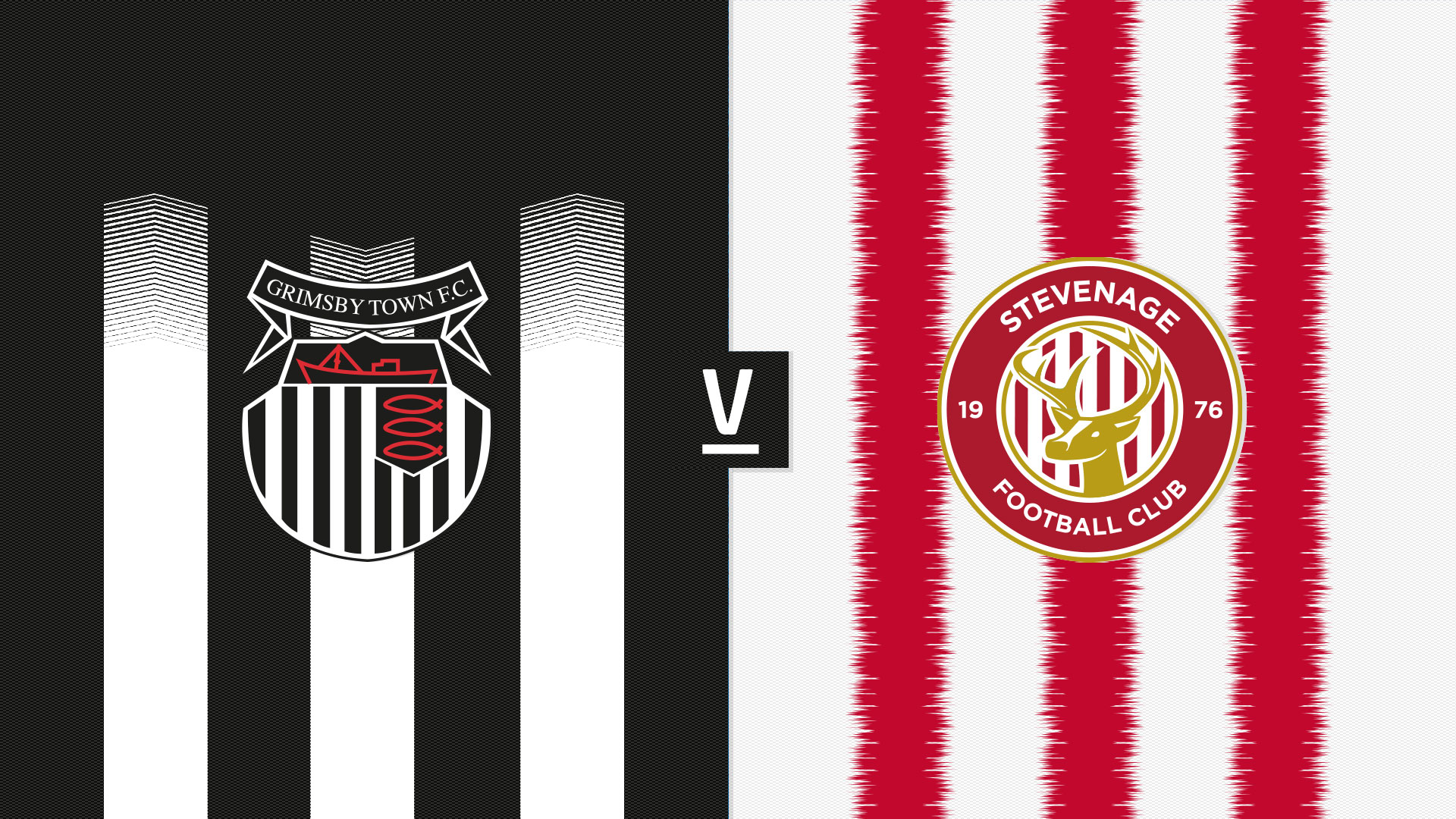 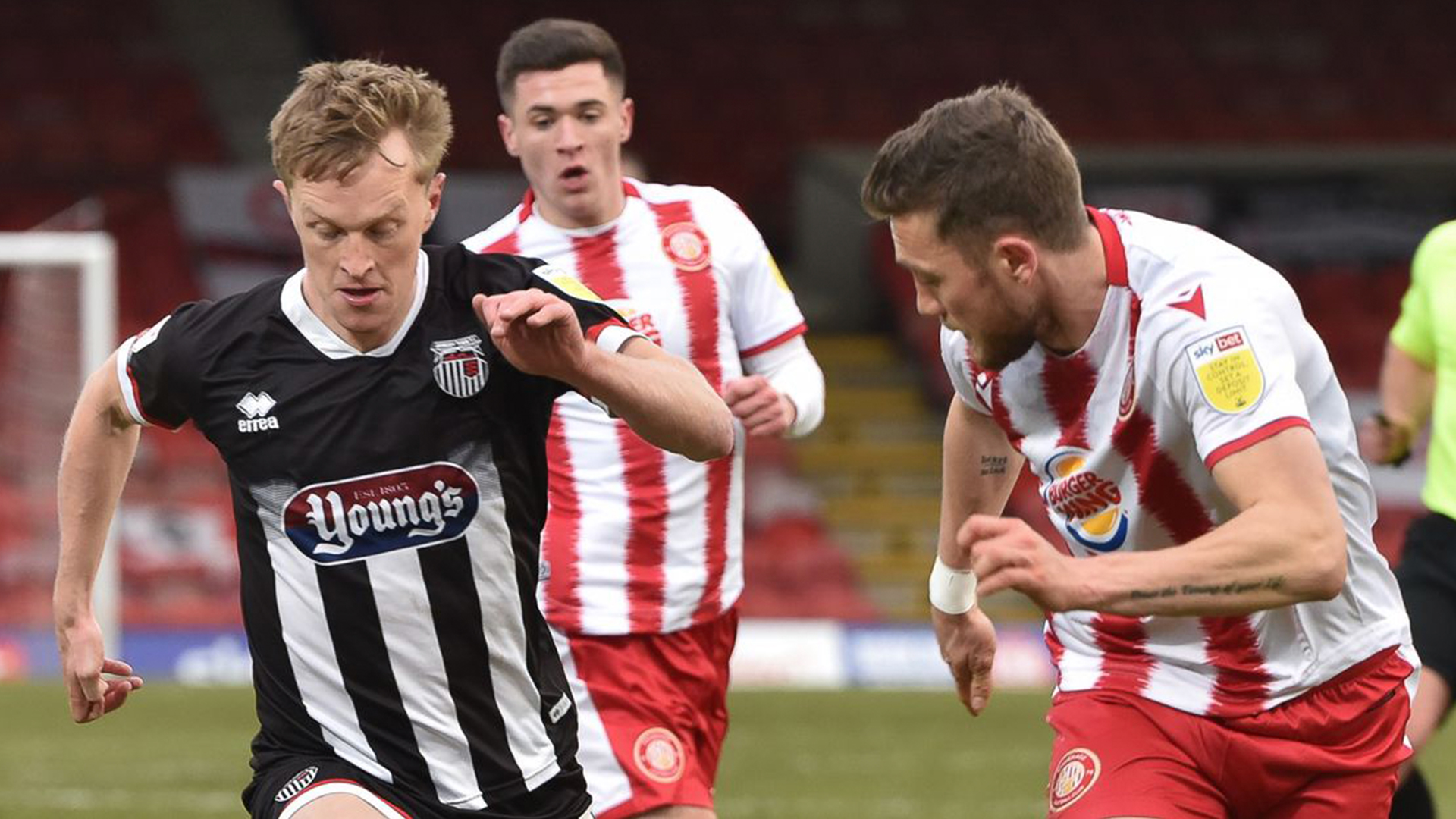