Listen to reaction to relegation from Lenny and Paul Hurst, and listen to a feature-length interview with the gaffer on preparations for next season.

Listen to the thoughts of Town boss Paul Hurst and Lenny.

We’ve got a feature-length interview with the gaffer as he begins preparing for life back in the National League.

He thinks that it’s going to be a busy summer in the transfer market, he confirms that the appeal against Jay Matete’s red card at Exeter has been unsuccessful and talks to us about the Fleetwood loanee’s future.

All this and more - only on iFollow Mariners.


Paul Hurst's men welcome Port Vale to Blundell Park this Saturday for our final home fixture of the 2020/21 season.

Grimsby Town finished their home campaign with a win against Port Vale at Blundell Park.

After the disappointment of having their relegation to the National League confirmed in midweek, the Mariners showed their character to bounce back with a victory.

A single goal, scored by Matt Green in the first half, ultimately proved enough to earn the points as Town withstood plenty of pressure after the break and their visitors were guilty of missing chances.

Five changes were made to the Grimsby starting XI following the defeat at Exeter City on Tuesday as Jake Eastwood, Luke Hendrie, Sam Habergham, Sean Scannell and Ira Jackson Jr all came into the team. James McKeown, Luke Waterfall, Luke Spokes, Lenell John-Lewis and the suspended Jay Matete made way.

Eastwood returned in goal, with Hendrie, Elliott Hewitt, Rollin Menayese and Habergham in front of him in defence. Scannell, Harry Clifton, Giles Coke and Evan Khouri were the midfielders and Green began alongside Jackson in attack.

McKeown, Spokes, Waterfall and John-Lewis were all named on the bench, where there was also a return from injury for Mattie Pollock as Luis Adlard and Julien Lamy completed the matchday squad.

Port Vale arrived in Cleethorpes as the form team in League Two, having gone on a run of eight wins from their last nine games which took them from the fringes of the relegation zone in mid-March to a comfortable position in the top half of the table at kick-off.

They would look to the likes of top scorer Devante Rodney to cause problems for the Mariners defence and help keep that run going.

The away side won the first corner of the game on four minutes but could not make it count as the ball eventually came back to Tom Conlon on the right and his cross went out at the far post for a goal kick.

A foul on Green near the halfway line gave Town their first opportunity to attack but Habergham's free kick to the edge of the penalty area failed to cause any significant danger and the ball was cleared.

Danny Whitehead tried his luck for the visitors on 12 minutes, although his low effort went just past the post for a goal kick.

At the other end, Clifton did well to win a corner on the right but after the delivery from it was lifted back into the box by Hewitt, it went through to keeper Scott Brown.

Habergham sent a free kick out of play for a goal kick after Green was fouled inside the Port Vale half, then a snap-shot by Clifton was caught by Brown.

Neither goalkeeper had come under presure in a low-key opening half-hour, with both teams struggling to create any clear-cut chances.

But that changed soon afterwards when the Mariners took the lead on 32 minutes. A short back-pass by Luke Joyce fell into the path of GREEN and with only Brown to beat, the striker took the ball into the box and made no mistake with a calm finish into the far corner of the net.

The away side's response saw Rodney plant a header wide of the target after a spell of possession, before Eastwood produced a good save to keep out Cristian Montano after he shot on the turn from 20 yards and the offside flag went up as the rebound was smashed over the bar by Theo Robinson.

Green was booked after catching defender Leon Legge with a swinging arm as the game moved into two minutes of added time and with no further chances coming for either side before the referee's half-time whistle, Town's one-goal advantage remained intact at the break.

No changes were made before the restart and Town won an early corner when a cross by Clifton was cut out. Habergham's ball from the flag was headed clear.

Seconds later, the visitors had a real chance to equalise as a defence-splitting ball put David Worrall one-on-one with Eastwood. The opportunity was not taken though as the keeper came off his line to block the midfielder's shot.

A cross from Green at the other end was blocked for a corrner but Scannell's delivery was cleared.

Legge was shown the yellow card on 54 minutes after a similar foul on Green to the one the striker had caught him with just before half-time, before a shout for a free kick in a dangerous position was waved away by the referee after Habergham appeared to pull Robinson back.

John-Lewis replaced Green in the first substitution of the game, then a stoppage came after a collision between Eastwood and Rodney which left both players needing treatment. The striker was passed fit to play on but Eastwood could not continue and was replaced by McKeown for the final 30 minutes.

A Port Vale corner from the right was caught by McKeown, before Jackson showed good persistence at the other end to chase the ball down and flick it back across goal, although it was cleared.

Harry McKirdy replaced Whitehead, Tom Pope came on for Robinson and David Amoo was sent on in place of Legge as the visitors made a triple-substitution with 24 minutes to go.

A foul on Conlon on the left gave them a free kick soon afterwards and Conlon's delivery from it was good but the ball was headed off-target at the far post for a goal kick.

McKeown dived to keep out a 20-yard, first-time shot from Conlon as the away side continued to attack in search of an equalising goal.

A corner came moments later as McKirdy's cross was blocked and from it, Hendrie had to head clear off the line from Nathan Smith.

Pollock and Spokes replaced Habergham and Scannell as the Mariners aimed to hold onto their lead.

Town won a free kick when Jackson was pulled down by Montano near the left edge of the penalty area but after the yellow card was brandished, the Mariners were unable to profit as Spokes' delivery beat everybody and went out at the far post for a goal kick.

A cross from Worrall on the right fell for Pope but he was unable to get enough on his header to beat McKeown.

Another corner from the Port Vale right was headed clear by Pollock, before Rodney hit the post with an effort from the edge of the box after the ball was played back to him by Montano.

McKeown was called into action soon afterwards to push a header from Pope away from goal, then Pollock bravely headed clear after another cross was sent into the penalty area.

Will Swan came on for Joyce in the Port Vale midfield with five minutes to go and the visitors were reduced to 10 men soon afterwards when Montano was shown a second yellow card for a foul on Hendrie.

The fourth official signalled eight added minutes to be played at the end of the game and Town had a chance to make sure of the points when Clifton wen through on a run from halfway but after he pulled the ball back across goal, Coke could only send it over the bar.

Port Vale kept pushing forward in a last-ditch bid to take something from the game but Town held on for all three points as they ended a tough season at Blundell Park on a high.

The Mariners will aim for a similar performance and result when they finish their season away at Cambridge United on Saturday.

Next Up: Cambridge United (A)


Paul Hurst's men welcome Port Vale to Blundell Park this Saturday for our final home fixture of the 2020/21 season. 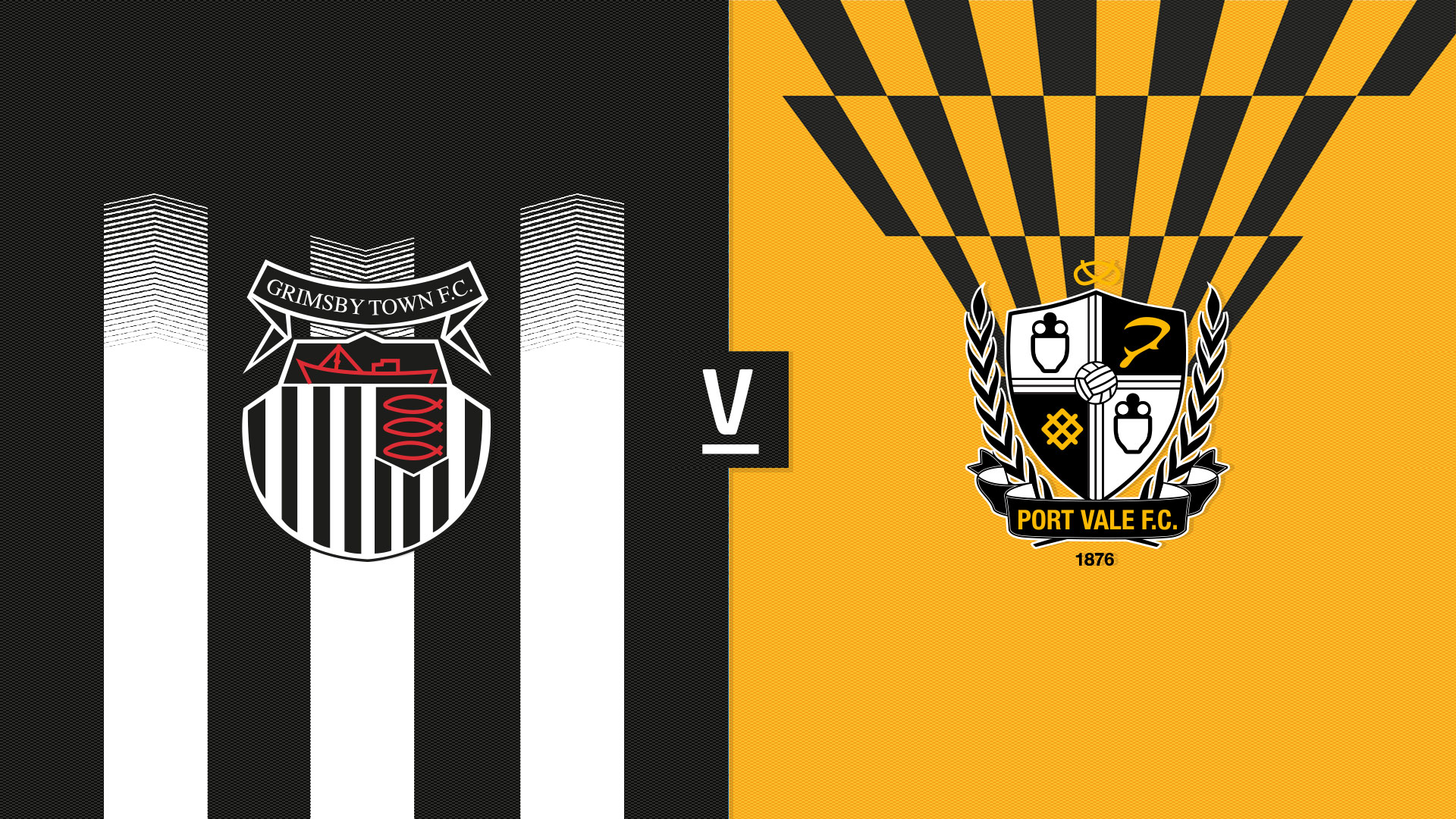 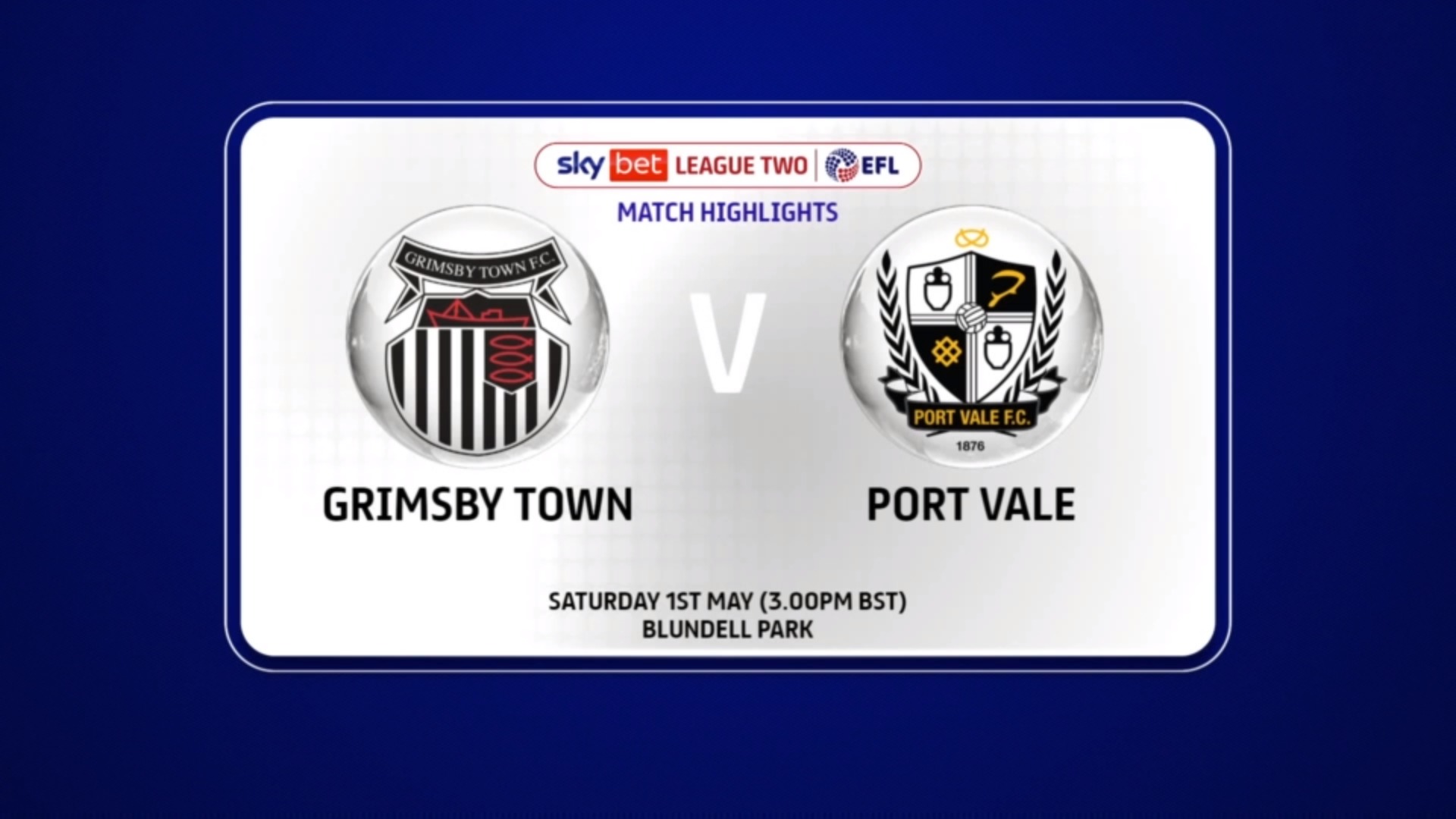 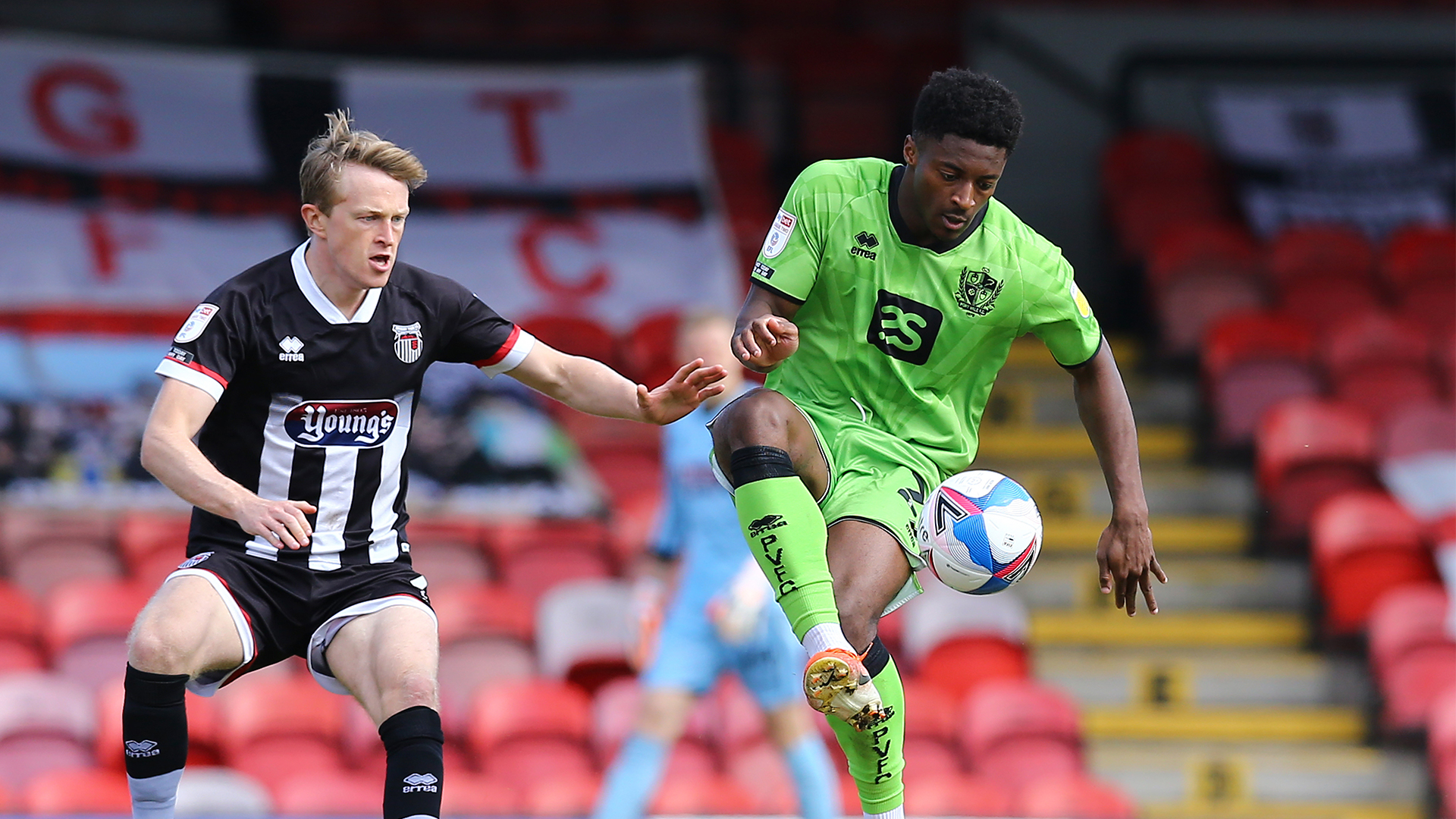