Listen to all of today’s pre-match press conference. Ollie started by clarifying the situation regarding Ludvig Öhman and Bilel Mohsni.

Listen to all of today’s pre-match press conference.

Ollie started by clarifying the situation regarding Ludvig Öhman and Bilel Mohsni.

He told iFollow: “The situation is, he’s got a contract, and as far as I know, it hasn’t been sorted out between the club and him.

“I don’t deal with that, that’s not my gambit. What I’ve said is I can do without those because I need to do this.

“As far as I’m concerned, I think Ludvig is agreed and his is sorted, and I’m not sure about Mohsni’s, he was in training this morning.”

Listen to the whole of this interview on iFollow Mariners.


The Mariners return to Sky Bet League Two action this Tuesday for the trip to Crawley Town for a 7pm kick-off.

Grimsby Town earned a much-needed three points as they came from behind to beat Crawley Town.

The Mariners went a goal down when Max Watters struck with just four minutes on the clock but they grew in confidence throughout the first half and deservedly equalised through Matt Green.

After getting themselves level, Town were the better side and they completed the turnaround six minutes into the second half as Max Wright scored what proved to be the winner.

Six changes were made to the Grimsby starting XI following the 5-0 defeat at Tranmere Rovers on Saturday, with Duncan Idehen, Danny Preston, Elliott Hewitt, Wright, Sean Scannell and Green all coming into the team.

Wright, Hewitt, Danny Rose and Owura Edwards were the midfielders, with Scannell and Green in attack.

Crawley also came into the match following a heavy defeat after losing 3-0 at home to Carlisle United at the weekend but were previously unbeaten in three games in all competitions.

The home side's starting line-up included a familiar face in the shape of former Mariners midfielder Jake Hessenthaler, who left Blundell Park in the summer.

Town got off to the worst possible start when Crawley took the lead from their first chance of the game on four minutes, after the visitors lost possession and the ball was worked out to Sam Matthews on the right. His low cross was not fully dealt with and as it dropped for WATTERS, he lashed a powerful shot past McKeown and into the top corner of the net.

The Mariners looked to respond and a long throw from Hewitt caused problems for the home defence until the ball was eventually scrambled away.

Another Hewitt throw soon afterwards led to the ball coming back out to Wright on the right but his cross was headed over the bar by Green.

Wright did well to beat his man and get a cross over from the right on 14 minutes but after the ball went over home goalkeeper Glenn Morris' head, Green could only head it back down from a narrow-angle at the far post and the keeper gathered it.

A foul on Wright four minutes later gave Town a free-kick but it caused no problems for the home defence as Hewitt's ball was blocked by Jake Hesketh.

Hewitt and Crawley's Tom Nichols were spoken to by the referee after a tussle near the halfway line, before a great cross from the left was headed wide by Nichols but the flag had already gone up for offside against the attacker.

A long throw from Emmanuel Adebowale was cleared for a corner and it marked the start of a spell of home pressure, with two more corners following in relatively quick succession.

Watters pounced on a mistake by Idehen on 27 minutes to make progress down the right and send a low cross over but Waterfall was in the right place to get it away for a corner. The ball from the flag was missed by McKeown but defender Joe McNerney was unable to make contact to turn it into the net and instead, it went out for a goal kick.

Watters was involved again soon afterwards as he shot from 20 yards but McKeown got down to make a stop.

Town's next opportunity came with a free-kick which saw Rose find Green but the offside flag went up against the striker.

Another good delivery into the box by Rose on 33 minutes looked to have found Scannell but after getting in front of his man, he was unable to make contact with the ball and instead, it hit Josh Doherty and went to safety.

The Mariners were now looking more of a threat and they forced an equaliser on 35 minutes. A free-kick from Rose was headed across goal by Scannell and when the ball fell for GREEN, he slotted it past Morris and into the bottom corner of the net.

Scannell did well to make progress into the Crawley half on 39 minutes before finding Wright, who was fouled. The free-kick did not lead to a goalscoring opportunity though and Crawley broke, although a through-ball was too far ahead of Hesketh.

Town were now on top and a foul by Hesketh on Wright ended a flowing move but brought a free kick, level with the right edge of the penalty area. Rose's delivery from it was too close to Morris though and the keeper claimed a comfortable catch.

At the other end, a low effort by Jake Powell from 20 yards was well-saved by McKeown after the shot took a deflection.

One added minute was played at the end of the half and the scores remained level at the break.

Town had started badly but they grew in confidence as the half went on and deserved their equaliser.

No changes were made before the restart and the first opportunity of the second half came through a free kick on the left following a foul by Wright. Powell's delivery was headed clear by Hewitt.

At the other end, a long ball from Hewitt found Edwards, who held off Doherty before turning and lifting a shot over the bar from the edge of the box.

Town took the lead on 51 minutes as they crafted a brilliant second goal. Preston's ball down the line found Edwards on the left and he crossed for WRIGHT to send a precise first-time finish past Morris from 12 yards.

Edwards looked for Green with a through-ball on 56 minutes as the Mariners went in search of a third goal but the keeper was alert to the danger and raced off his line to beat the striker to the ball.

More quick attacking play by the away side led to Green crossing from the left just before the hour but Green's header went through to Morris.

Crawley were yet to seriously threaten in the second half but they had a chance when a slip by Idehen let Watters go through into the penalty area, although his shot was well blocked by the arm of McKeown.

The hosts then made the first substitution of the game, with Ashley Nadesan replacing Matthews.

Wright went close on 65 minutes, cutting in from the right and hitting a low shot from distance which was tipped away for a corner by Morris.

Nadesan had a good chance when the ball came to him inside the Town box on 67 minutes but he dragged his first-time effort wide of the far post and the Mariners' lead remained intact.

Idehen went down with an injury on 73 minutes and was replaced by Clifton after receiving treatment.

Scannell tried his luck with a speculative effort from the halfway line on 78 minutes after spotting Morris off his line but the ball flew just over the bar, with Powell booked for a late challenge on Edwards.

Hewitt and Watters were also shown the yellow card moments later after an altercation near the touchline.

Gomis came on in place of Edwards with seven minutes to go, before Tyler Frost replaced Hesketh for Crawley.

Town remained the better of the two sides but were forced to defend as the hosts pushed for an equaliser with the clock ticking down.

Sam Ashford was the third substitute to be sent on for the home side as he replaced Nichols in attack and his first touch was to fire over the bar from 20 yards.

Adlard and Starbuck replaced Green and Scannell as the game moved into five minutes of added time.

Clifton turned and curled a shot just wide from the edge of the box as Town looked for a third goal to seal the points.

But that third goal was not needed as they closed out the remainder of the game to secure an important victory.

With no game on Saturday, the Mariners are next in action on Tuesday, when Exeter City are the visitors to Blundell Park.

Next Up: Exeter City (H)


The Mariners return to Sky Bet League Two action this Tuesday for the trip to Crawley Town for a 7pm kick-off. 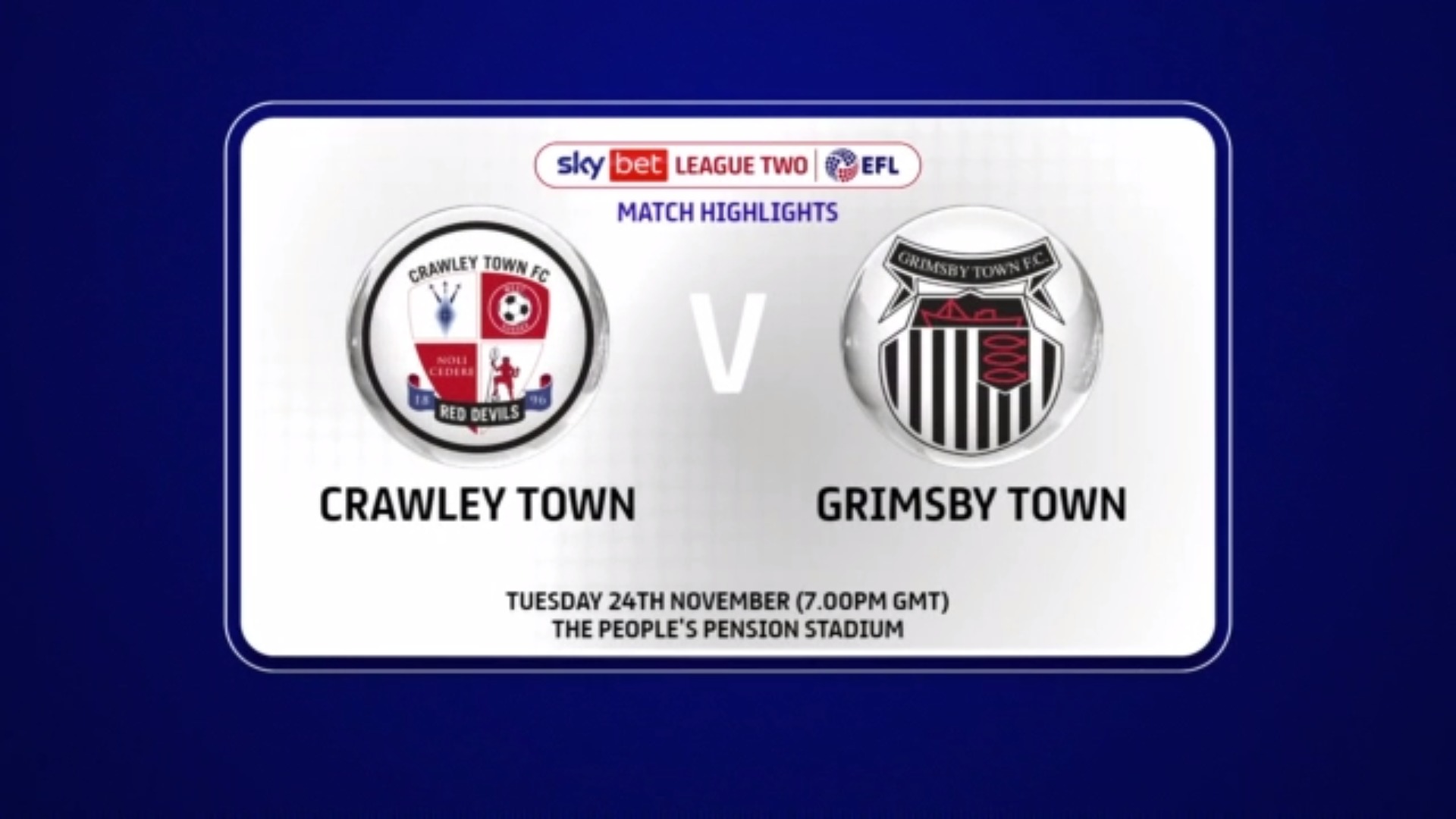 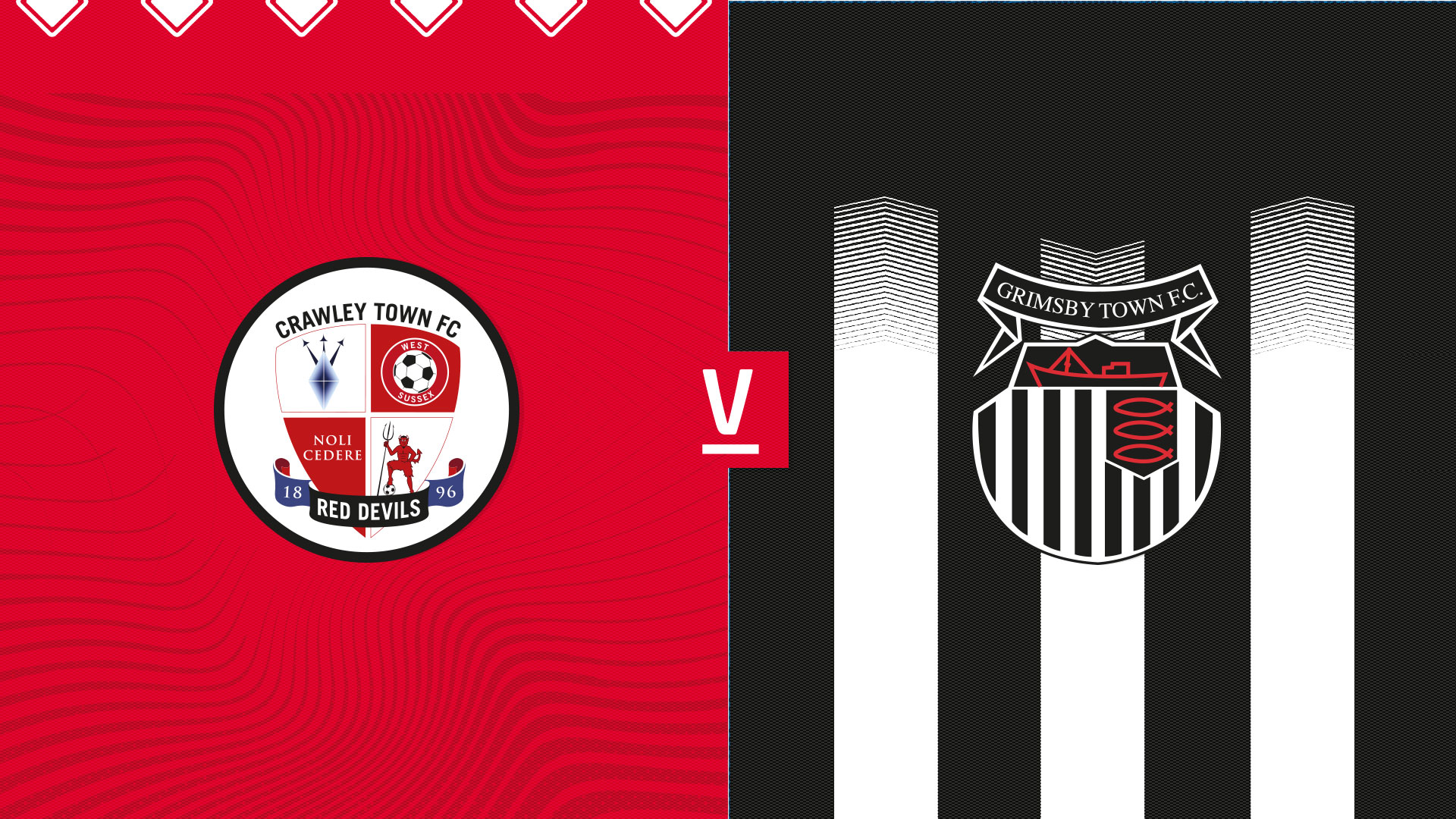 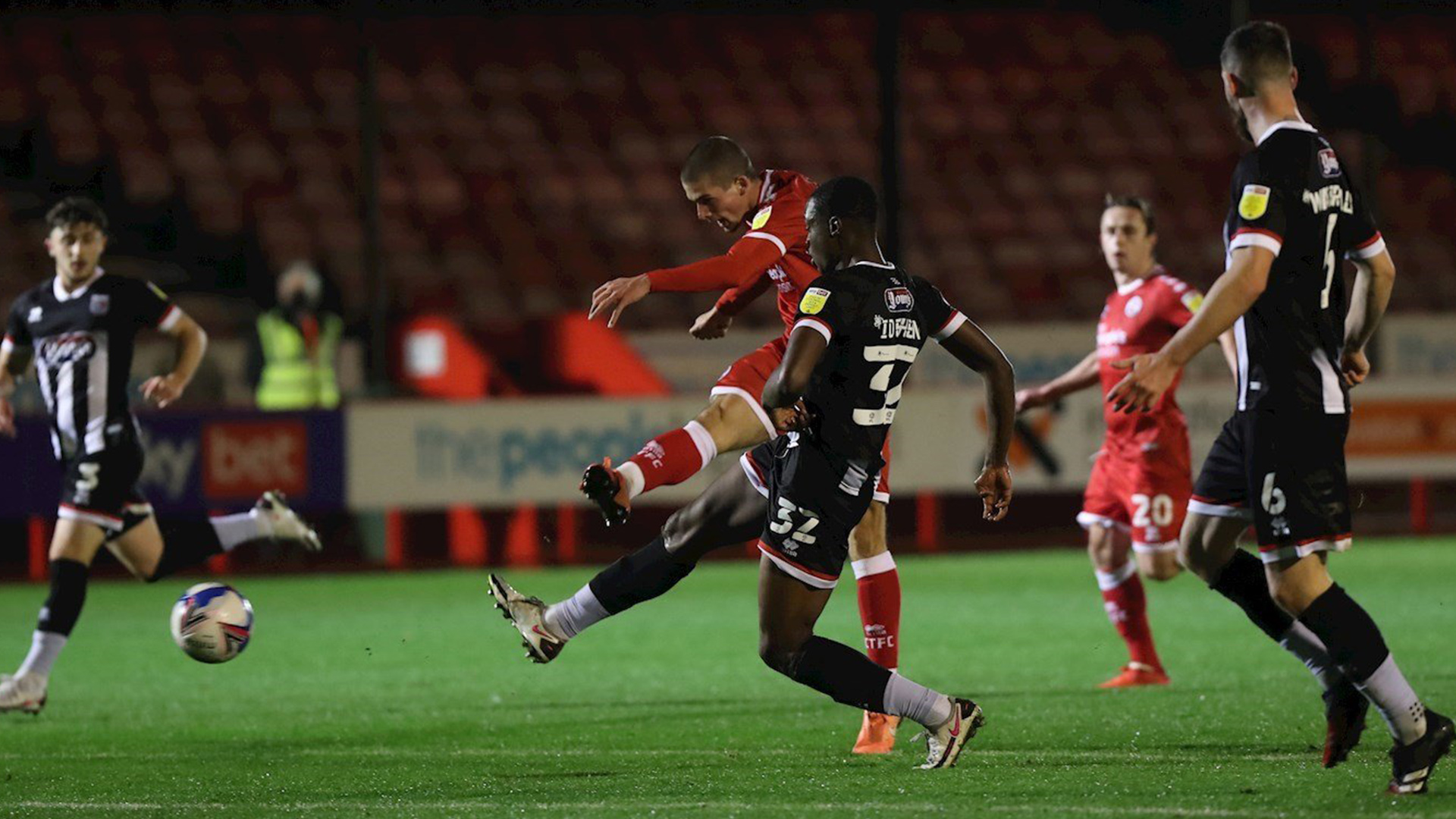