Listen to Ollie’s pre-match press conference ahead of Tuesday’s Papa John's Trophy tie at Hull City.  The Town boss is relishing coming up against Grant McCann’s side.

The Town boss is relishing coming up against Grant McCann’s side.

Ollie said: “We’ve got a really good game on our hands against Hull.

“It’s a brilliant pitch, a fantastic surface to play on.

“They played on Saturday and we didn’t - so we should be ready.

“Hull are a good side. I don’t know if they will pick the same team, but their manager has made some comments saying he wants to win it – not just this game but the whole thing.

“It will be a good test for us and one that I am really looking forward to.”

He continued: “The attitude in training has been absolutely fantastic - it always has been.

“It’s now about staying in the game and knowing what they need to do themselves – if they come under the cosh at any time, how to withstand that.

“That is something we need to work on and we need people to step up to the plate and take more responsibility - I think we are leaving it to one or two rather than all of us.

“It is something you have to work on and get somehow, but when we are such a new group it is very difficult.

“There have been signs that it has been coming - but then we do something absolutely crazy at the wrong time that costs us the whole result.

And the Town boss has received an injury boost ahead of the short trip across the Humber. Owura Edwards, Max Wright and Sean Scannell are all in contention for the game.

Midfielder Elliott Hewitt is also back in the frame, but Luke Hendrie misses out with a groin problem.

Grimsby Town were knocked out of the Papa John's Trophy as they were beaten by Hull City at the KCOM Stadium.

The Mariners went into their final group match knowing a win would be enough to take them into the knockout stages but found themselves 2-0 down at half-time after Norway international Martin Samuelsen struck twice.

Town worked hard but were unable to cause enough problems for the Hull defence to find a way back into the contest after the break.

And after the League One hosts had looked the more likely to get the game's third goal, it came with 11 minutes to go, as substitute James Scott made the three points safe for Hull and secured their passage into the next round as Northern Group H winners ahead of second-placed Leicester City U21.

A late penalty gave Samuelsen a chance to complete his hat-trick but his spot-kick was well saved by Town keeper James McKeown.

The Grimsby starting XI showed six changes from the team that began the home defeat by the young Leicester side last Tuesday.

Wright and Danny Preston operated as wing-backs, with Spokes and Danny Rose in midfield and Sean Scannell, Bennett and Green in attack.

Battersby, Idehen, Starbuck, Williams and Morton were all named on the bench, alongside Alhagi Touray Sisay and the returning Owura Edwards, who was back from injury.

Hull boss Grant McCann changed his entire starting XI following the league victory over Burton Albion at the weekend but still named a strong line-up with the aim of making further progress in the competition.

Town had the first opportunity of the game inside the opening minute as the ball was played through for Wright but after opting to take a touch, he was then unable to apply a finish.

Wright also became the first player of the game to be booked when he was shown the yellow card after a poor challenge on Dan Batty near the halfway line on three minutes.

Hull's first opportunity to put pressure on the Town goal came when they won a corner on the right but they were unable to cause any serious problems as a glancing header from Sean McLoughlin went wide.

Bennett showed good skill to work an opening for a cross from the left on 13 minutes but his ball did not find a team-mate.

A low shot from Callum Jones five minutes later was deflected out for a Hull corner, which was comfortably cleared.

Tom Eaves then headed over the bar at the end of a good attacking move by the hosts, although the offside flag had already gone up against the striker.

The Mariners were looking confident in possession as the midway point of the half passed, although neither goalkeeper had yet been called into any serious action.

But Hull's next chance brought the opening goal on 27 minutes. The ball was played back into the path of SAMUELSEN on the edge of the box and he found the top corner of the net, leaving McKeown with no chance.

Town's response saw them win a corner on the right and Spokes' delivery was met by Waterfall but his header went across goal and out for a goal kick.

The home side then doubled their advantage just after the half-hour. Goalkeeper George Long played the ball to Hakeeb Adelakun in space on the left and he cut into the penalty area, beat Ohman and sent a curling shot towards the far post which was headed into the net by SAMUELSEN from close range.

The Town players appealed for offside against Samuelsen, with McKeown leading the protests, but the goal stood and the visitors now had a huge task if they were to get the victory needed to progress beyond the group stage.

A run and cross from Preston on the Grimsby left went unrewarded as the low ball was gathered by Long, before a Hull corner at the other end was headed clear.

Adelakun curled a shot over the bar from 20 yards, then Scannell also fired over the top after controlling a cross from the left and shooting on the turn.

Three added minutes were played at the end of the half and the hosts went in search of a third goal, with Waterfall forced to head behind for a corner after a chipped cross from Eaves.

No further chances came before the referee's half-time whistle, leaving Town with a two-goal deficit at the break.

No changes were made before the restart and Town started brightly, looking to build up attacks.

A Scannell cross from the right failed to cause any significant problems, before a Hull free-kick was dealt with at the other end.

A quickly-taken free-kick by Batty was headed wide by Eaves, then the Mariners made the first substitution of the game as Edwards replaced Wright.

Edwards' first action saw him win a corner on the left and Spokes' delivery from it was flicked back towards his own goal by Brandon Fleming, with keeper Long turning it behind for another corner. This time, Pollock was penalised for a foul as the ball came across from the flag.

Green was booked for a late challenge and it proved to be his last action as he was replaced by Sisay on the hour, with Thomas Mayer and Scott coming on in place of Adelakun and Eaves for Hull at the same time.

Mayer had a shooting chance within seconds of coming on but his effort was pushed away from goal by McKeown, with Pollock ensuring the ball did not go out for a corner.

Edwards was booked for a foul after overrunning the ball, before Samuelsen had a chance to complete his hat-trick but saw a shot from 12 yards blocked by Preston.

Mayer had a chance to make it 3-0 on 67 minutes but McKeown did well to come off his line and block the striker.

The hosts were looking threatening and another chance soon afterwards led to a corner, which was headed clear by Ohman.

Williams came on for Bennett in Town's final substitution with 19 minutes left to play, before a cross from Scott on the Hull left was headed behind for a corner.

Callum Jones was replaced by Max Sheaf as the home side made their last change three minutes later.

And the hosts made sure of their win as they scored the third goal on 79 minutes. SCOTT got the ball on the left and cut inside, before going past Ohman and hitting a superb shot from 20 yards which went past McKeown and into the top corner of the net.

Hull had an opportunity to make it 4-0 with two minutes to go after Samuelsen made his way into the box before being brought down by Rose. The referee pointed to the spot but Samuelsen was unable to secure the match ball as his penalty was saved by McKeown, with the rebound also being saved.

Three added minutes were played at the end of the game and Town went in search of a consolation goal but it was not to come as a low effort by Sisay was stopped and a shot by Williams went wide.

That meant the hosts could close out what had been a comfortable win and confirm their place in round two as Town's involvement in the competition for this season came to an end.

The Mariners will be back in League Two action on Saturday, when they travel to Tranmere Rovers.

Next Up: Tranmere Rovers 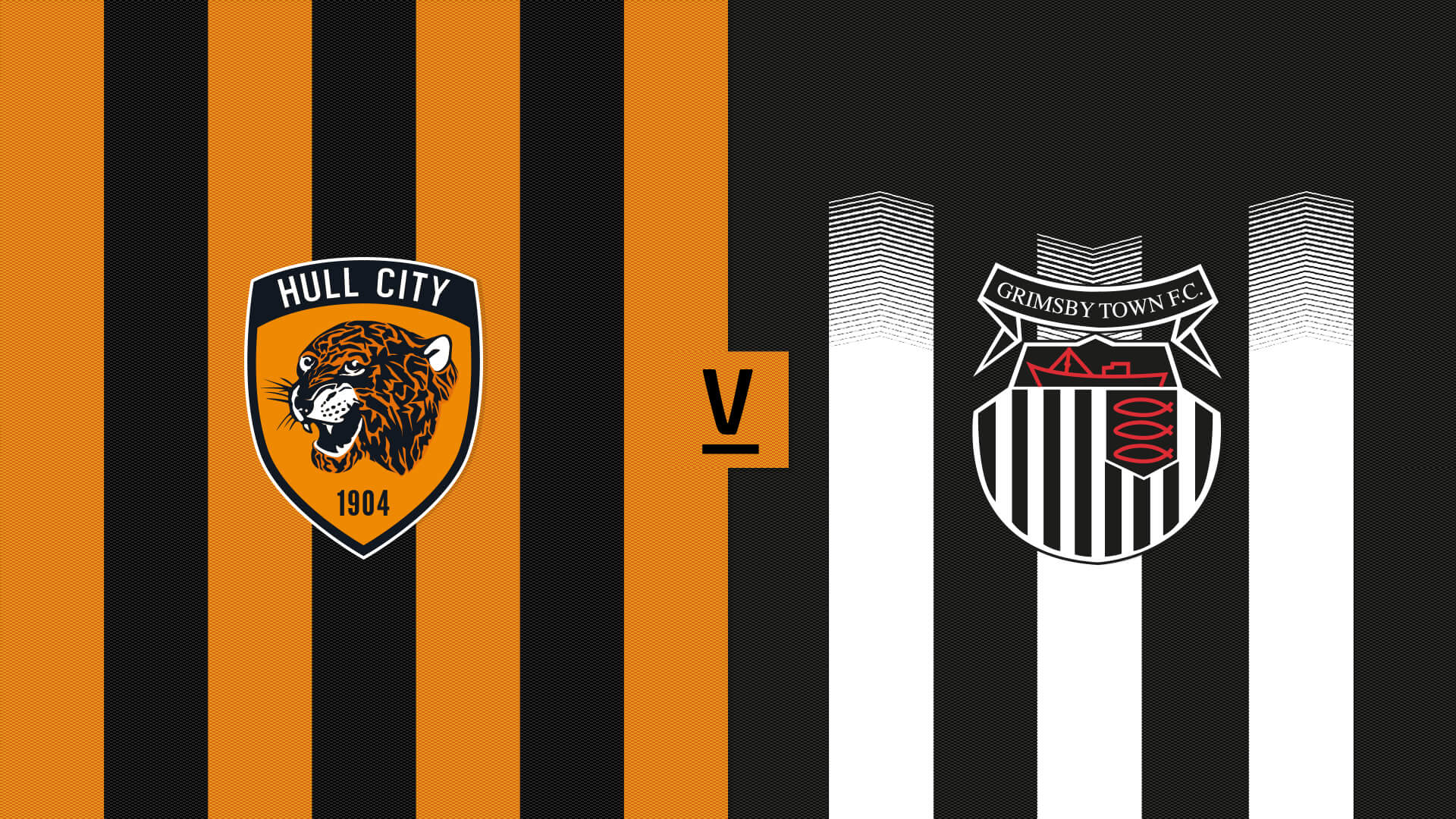 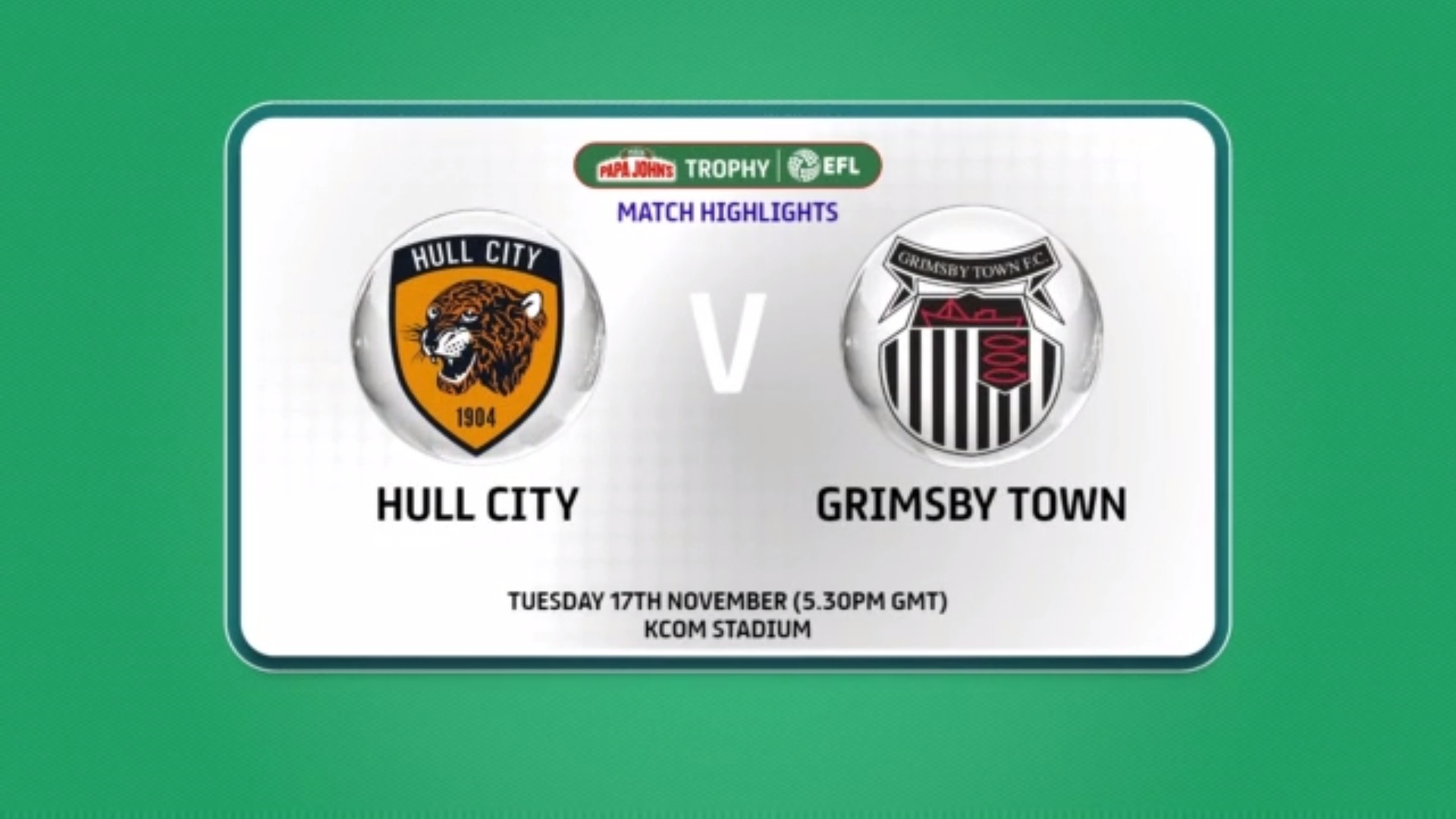 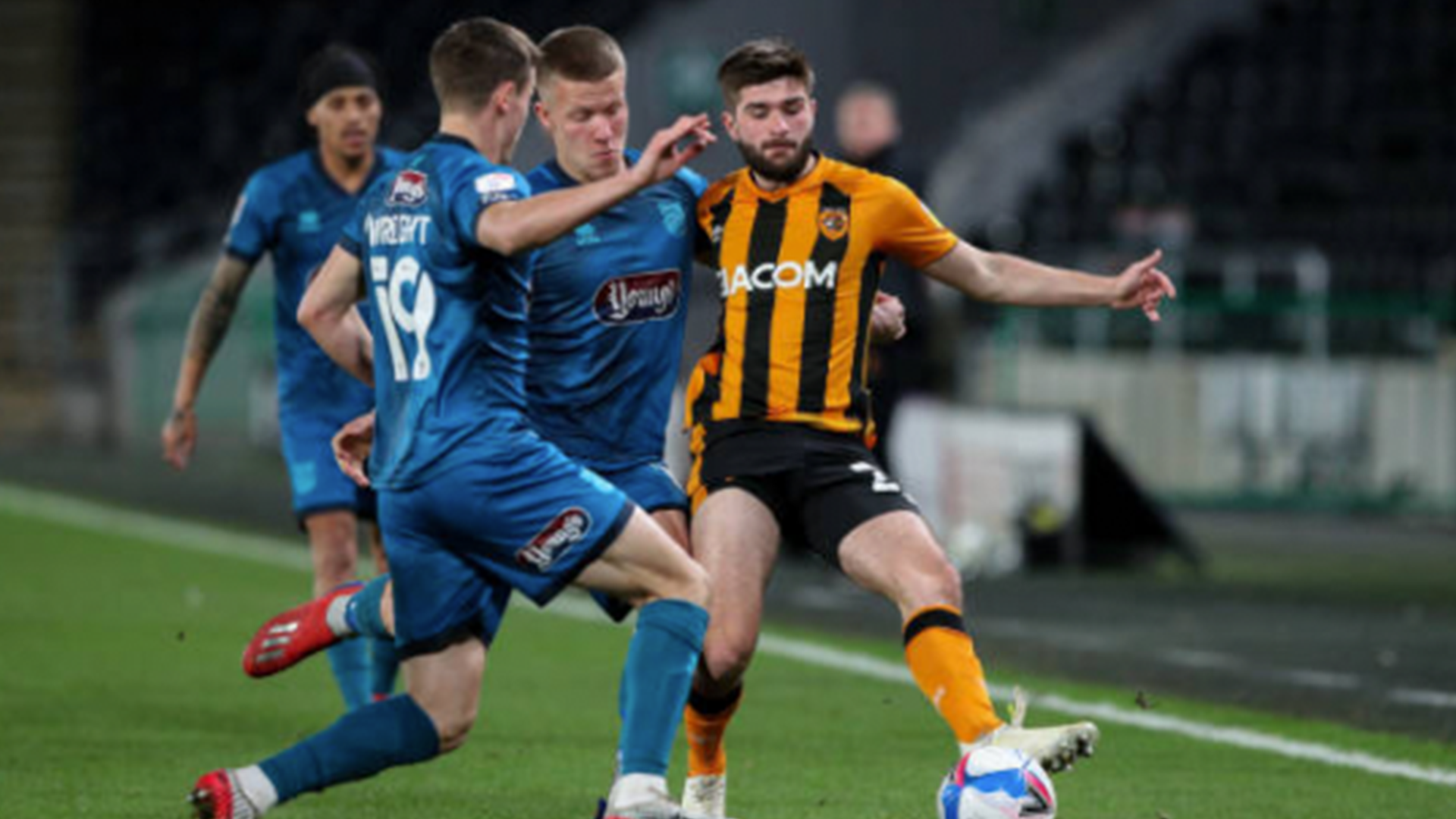