The latest team news, Ollie's thoughts on five subs, and news of a possible cull?

Listen to the whole of Ian Holloway’s pre-match press conference.

The Town boss started with the team news.

Ollie confirmed that Kyle Bennett is a doubt for Saturday's game with a sore hamstring after playing in Tuesday's night's defeat at Hull.

Luke Hendrie is fit again and available after missing the last two games, while Elliott Hewitt is back available, having been out since September.

Ollie also confirmed that James Hanson could be just two weeks away from a possible return. The striker, who is currently out with a hamstring problem, has been back running at Cheapside this week as he continues his recovery.

Ollie also expressed his relief at the decision to allow five substitutes during a game.

“The news of being able to have five substitutes is a massive relief at last,” he said.

“It’s amazing though, 14 clubs said yes in our division, and 10 didn’t. I don’t know what they’re thinking about. Complete idiots.

“We won’t be doing it for time-wasting, we’ll be doing it to save our lads so I might be able to pick the same team, work with them, make five subs and gradually catch them up that way, which is a massive relief.”

Cull on the way.

The Town boss has said that he will be moving some of his players on in the coming weeks. He said:“I won’t need as huge a squad as I’ve got, so I’ll have to cull that coming up to January.

“Anybody I don’t like, I haven’t used or haven’t done as well as I want, I can move them out, and that’s what’s going to be happening over the next couple of weeks.”


The Mariners return to Sky Bet League Two action this weekend for the trip to Tranmere Rovers for a 3pm kick-off.

Former Everton striker James Vaughan opened the scoring on 10 minutes, before three goals within seven minutes either side of the half-hour put the result beyond doubt.

Defender Peter Clarke, who also started his career at Everton, doubled Tranmere's advantage, before Vaughan's second goal of the game came from the penalty spot after a foul by Danny Rose and midfielder Otis Khan made it 4-0.

Town improved after half-time but by then, the damage had already been done and the hosts added extra gloss to the scoreline when substitute Paul Lewis scored a late fifth goal.

Grimsby boss Ian Holloway made seven changes to his starting line-up for the return to league action after Tuesday's Papa John's Trophy defeat at Hull City.

Harry Clifton and Terry Taylor went straight back into the XI after returning from international duty with Wales U21, while Owura Edwards made a welcome return from injury from the start after getting some game time as a substitute at the KCOM Stadium in midweek.

Luke Hendrie was also back from injury as George Williams, Montel Gibson and Owen Windsor were the others to come in.

Taylor and Rose were the central midfielders, with Williams, Windsor and Edwards lining up behind Gibson in attack.

Tranmere started the game four places and three points ahead of the Mariners in the League Two table and were unbeaten in their last four games in all competitions.

An early stoppage came when Taylor went down with a head injury but he was passed fit to play on and the hosts created the first chance of the game, as striker James Vaughan fired over the bar after a low ball from the left.

The first corner also went to the home side after a cross from Corey Blackett-Taylor was cut out but the delivery from the flag was headed clear.

Tranmere took the lead on 10 minutes after a low cross from Blackett-Taylor was blocked but they retained possession and the ball was chipped into the box by Calum Macdonald on the left for VAUGHAN to head down and past McKeown, despite the goalkeeper's efforts to keep it out.

The hosts were dominating the early stages of the game and they almost had another chance on 13 minutes but Blackett-Taylor over-ran the ball inside the penalty area.

At the other end, Edwards looked for a way through down the left as he cut into the box but the ball was shielded out for a goal kick.

A foul by Pollock on Vaughan gave Tranmere a free kick on their right, although the Mariners eventually dealt with the ball from it.

Blackett-Taylor shot wide of the near post after good play by Vaughan as the home side created another chance, before Gibson's effort from distance for Town on 21 minutes was deflected away for a corner, which was punched clear by keeper Scott Davies.

Edwards also saw a shot deflected wide for a corner as the Mariners began to come into the game, with Waterfall then looping a header over the bar from Williams' delivery to the far post.

Tranmere were given an opportunity to put pressure on the Town goal on 27 minutes when McKeown's ball to Clifton on the left was too strong for him to control and Kieron Morris took it into the box and won a corner.

From the flag-kick, the home side doubled their advantage as CLARKE converted the rebound after his initial header was brilliantly kept out by McKeown.

And it was to get worse within two minutes as Blackett-Taylor drove into the box and was brought down by Williams. The referee pointed to the spot and VAUGHAN powered the penalty down the middle and into the net, despite McKeown getting a touch to it.

Town were struggling to get a foothold in the contest and it was put beyond their reach once and for all on 34 minutes as Tranmere made it 4-0. This time, it was KHAN who was given space to move forward and pick his spot to curl the ball into the net from 20 yards.

Hendrie was shown the first yellow card of the game two minutes later after a foul.

Town had created little in attack so far, although a a foul on Clifton gave them a free kick in a promising position after Hendrie's cross towards the near post had been flicked away. Williams' ball fell for Taylor, whose shot from 12 yards was deflected over the bar for a corner, which was cleared after Gibson had headed it back across goal.

Preston replaced Williams as Town made the first of their five permitted substitutions on 38 minutes, with Clifton moving to a more familiar midfield role as Preston slotted in at left-back.

A foul on Edwards then gave the visitors another opportunity to get the ball into the box, although Taylor's ball was cleared.

Edwards had been the main focus of Town's attacks and he won another free kick on 41 minutes but again, they were unable to turn it into a chance in front of goal.

The Bristol City loanee was involved again in the last minute of the half, cutting in from the left and curling a shot just wide of the far post.

Two added minutes were played and after a Preston cross from the left was cleared, the referee's whistle brought an end to a miserable first half for the Mariners.

No further changes were made before the restart and Town won an early free kick but Taylor's ball from it was caught by Davies.

The visitors seemed to have more of a spark about them in the opening stages of the second half and they had a chance when Edwards played the ball through for Windsor. The striker stayed on his feet after contact in a challenge from Jay Spearing but as Davies came out to narrow the angle, Windsor could only shoot wide of the near post.

Hewitt and Green replaced Taylor and Gibsson on 55 minutes and a foul by Hewitt gave the hosts a free kick on the left but the ball from it beat everybody and went out for goal kick.

Wright and Scannell were also sent on just after the hour as Rose and Windsor made way, meaning Town had used all five of their substitutions.

Waterfall was booked for a foul on Blackett-Taylor, before Hendrie won a corner after a clever flick from Edwards. The delivery from the flag was met by Pollock at the far post but he could not get enough power on his header and the ball went through to Davies.

Another promising attacking move involving Scannell and Preston ended when the left-back's cross went behind for a goal kick.

Kayne Woolery replaced the impressive Blackett-Taylor and Lewis came on for Liam Feeney as Tranmere made a double-substitution with 20 minutes to go.

Clifton did well to drive into the box on 76 minutes and hit a shot which was blocked for a corner, although the flag-kick caused no problems as the ball came back out to Scannell and his follow-up cross was caught by Davies.

Defender Manny Monthe was booked atfer bringing Edwards down as he looked to make progress into the penalty area.  The referee also showed the yellow card to Town manager Holloway and when the game restarted, the ball from the free kick was turned towards goal by Hendrie but Davies made a comfortable stop.

Morgan Ferrier replaced Vaughan and Khan made way for Danny Lloyd as Tranmere made two more substitutions on 80 minutes.

A free kick from the Town left was whipped into the box by Preston but nobody could get on the end of it and the ball went out for a goal kick.

Instead, the Mariners fell further behind as Tranmere grabbed a fifth goal with four minutes remaining. Ferrier did well to hold the ball up and pass it back to LEWIS, who was left in space on the edge of the box and beat McKeown, finding the far corner of the net.

A foul by Hendrie on Ferrier gave the hosts a free kick on the left edge of the penalty area as the game moved into three minutes of added time but Lloyd's ball from it was headed clear.

Tranmere closed out the rest of the game to complete what had been an afternoon to forget for Town.

The Mariners are back in action on Tuesday, when they travel to Crawley Town.


The Mariners return to Sky Bet League Two action this weekend for the trip to Tranmere Rovers for a 3pm kick-off. 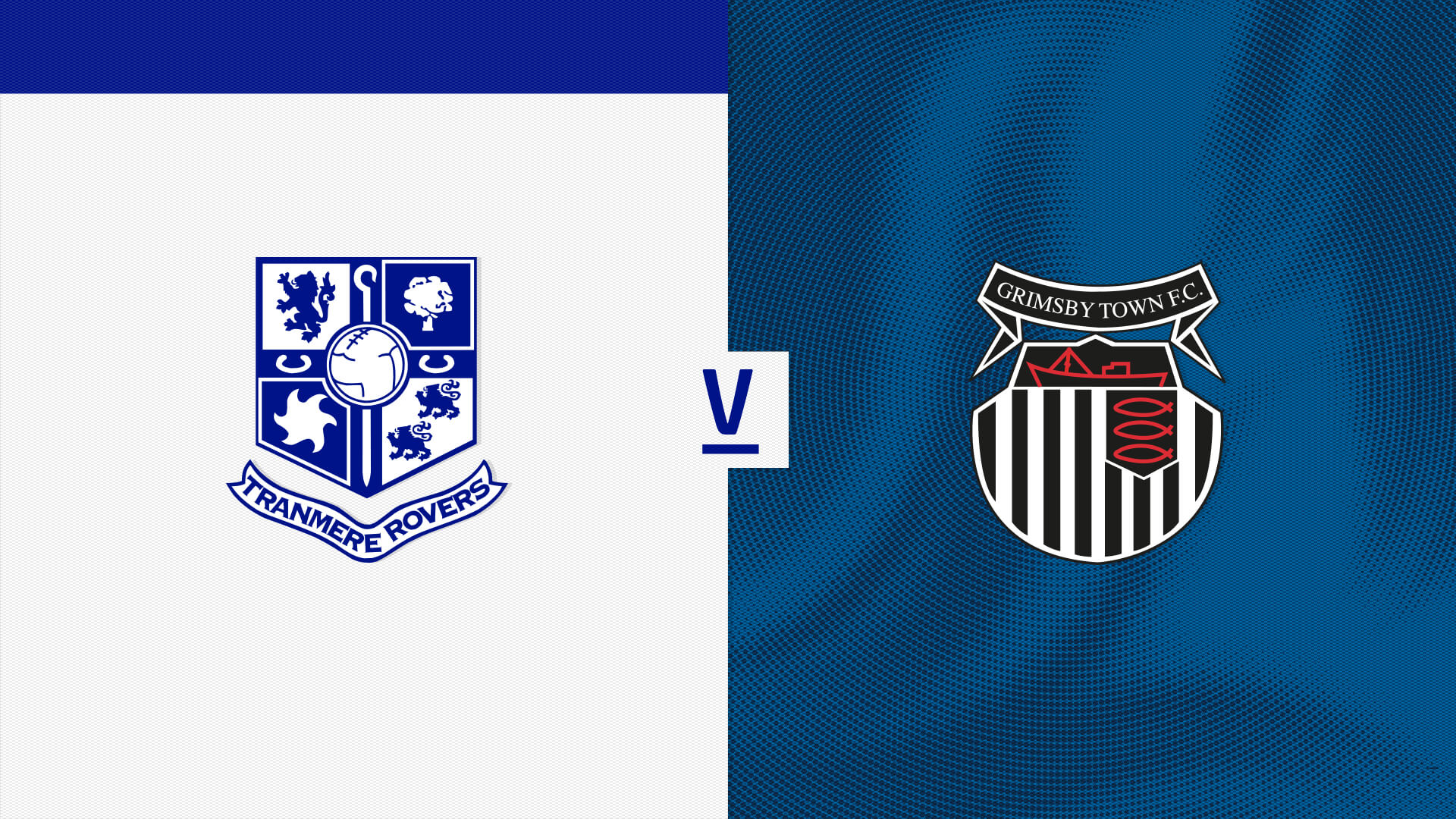 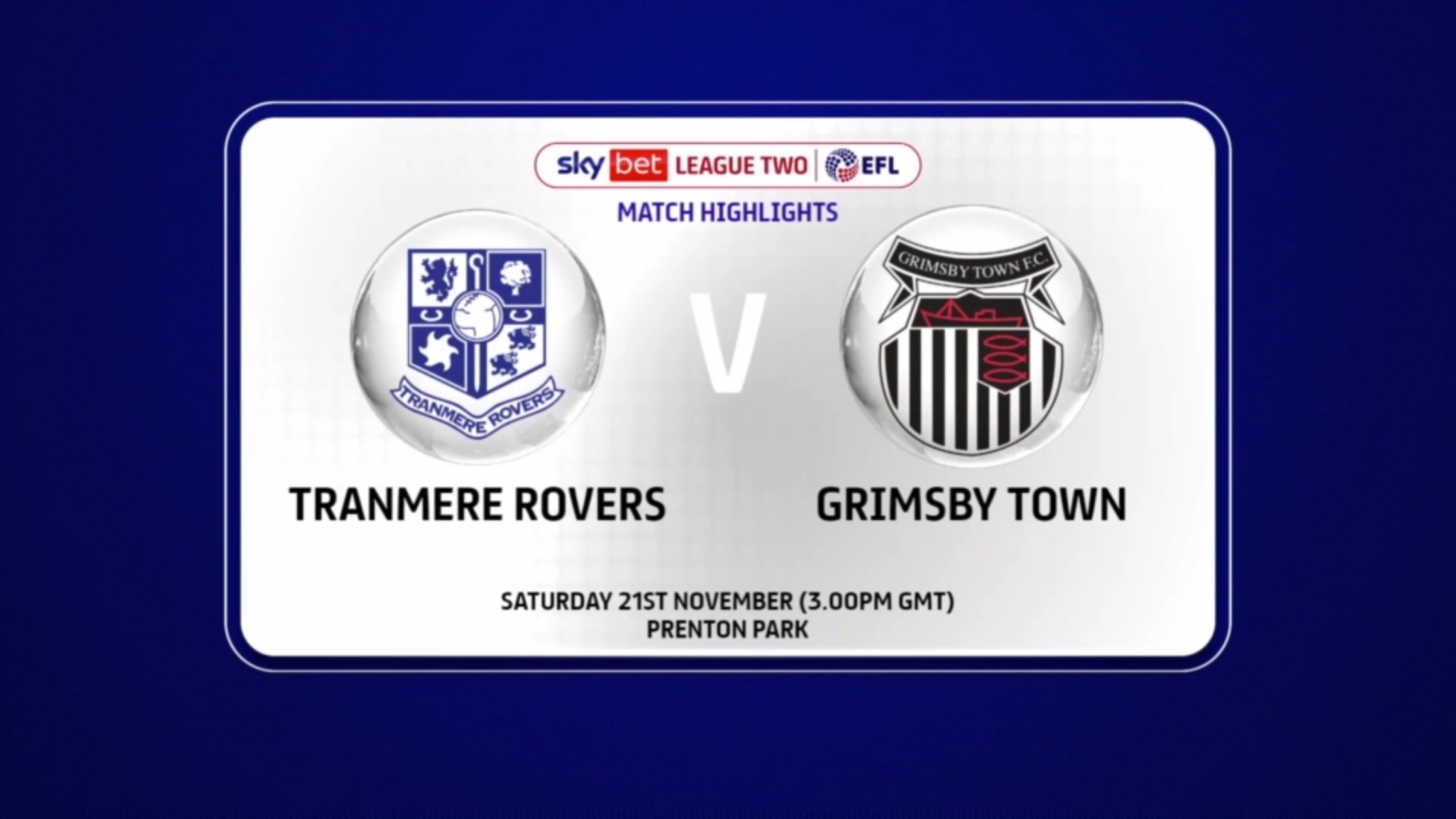 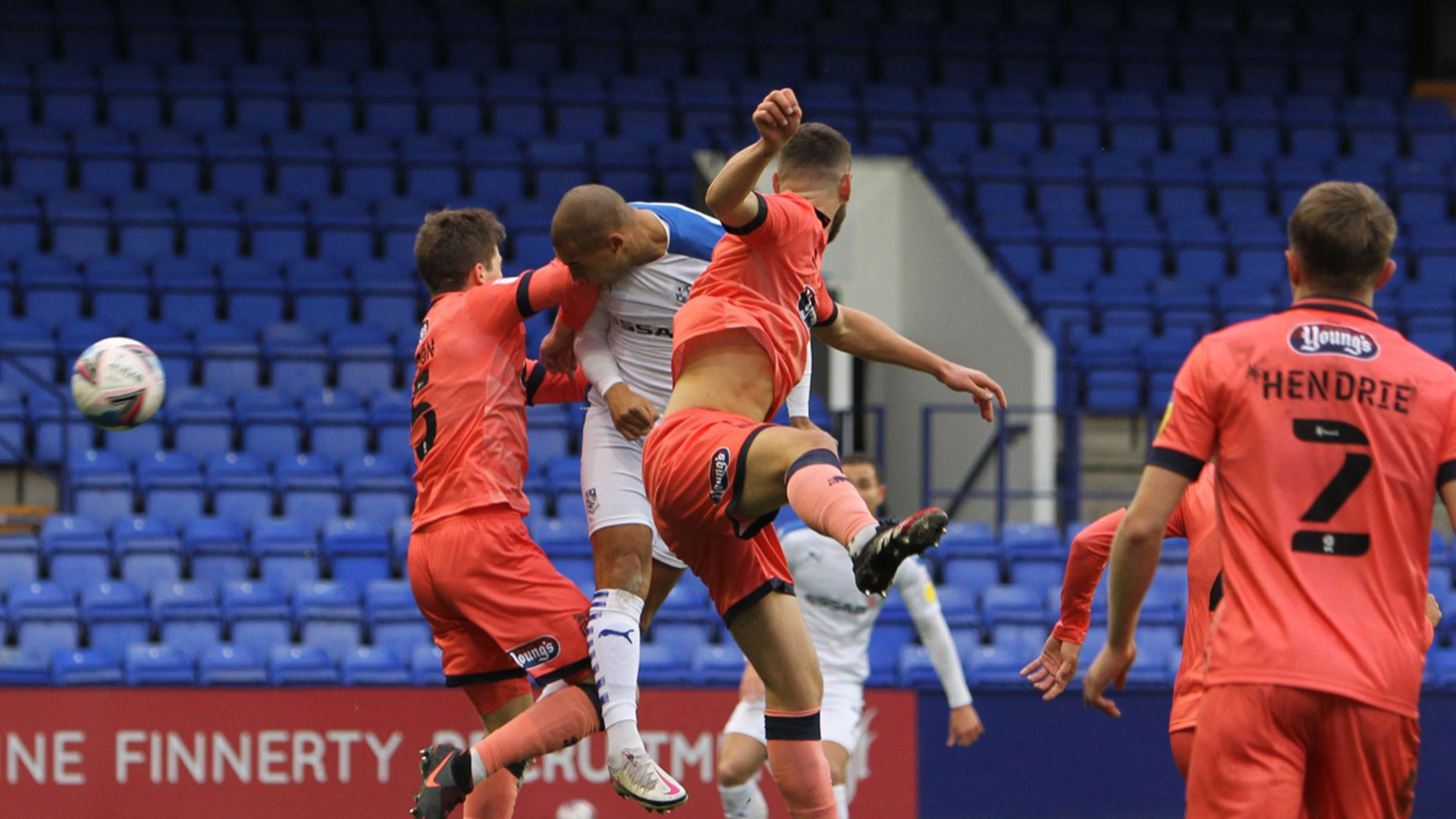