Listen to Ollie's ahead of Saturday's trip to East London. The Town boss started by reflecting on Tuesday’s fantastic victory at high-flying Cheltenham Town, he also brings us the latest injury news, and he tells us that he might not be quite done in the transfer market.

Watch The Mariners On The Road This Weekend

Listen to Ian Holloway’s pre-Leyton Orient Press Conference – all 14 minutes of it.

The Town boss started by reflecting on Tuesday’s fantastic victory at high-flying Cheltenham Town, he also brings us the latest injury news, and he tells us that he might not be quite done in the transfer market.

“I wouldn’t mind another one, whether I’ll get one or not, who knows.”

A dramatic late winner from the penalty spot gave Grimsby Town their second away victory of the week as they beat Leyton Orient 3-2.

The home side opened the scoring when Conor Wilkinson struck after just five minutes but the Mariners hit back through Luke Waterfall's header from a corner.

George Williams went on to give Town a half-time lead, before substitute Jordan Maguire-Drew levelled the scores with a little more than a quarter of an hour to go.

But the visitors were to have the final say as Owen Windsor was brought down inside the box as the game moved into added time and substitute Montel Gibson kept his nerve from 12 yards to find the net and ensure the points came back to North East Lincolnshire.

Town boss Ian Holloway made five changes to his starting line-up following the 3-1 win at Cheltenham on Tuesday.

Harry Clifton, Rose, Williams and Taylor were the midfielders, with Green and Windsor lining up in attack.

Edwards, Tilley, Morton and Gibson were all named as substitutes, along with Ollie Battersby, Duncan Idehen and Joe Starbuck.

An early home corner was dealt with, before former Mariner Craig Clay stopped Windsor from making his way into the penalty area at the other end.

Town fell behind with five minutes on the clock, when Ruel Sotiriou drove forward before playing the ball through for WILKINSON to fire past McKeown and into the bottom corner of the net.

After the goal, the visitors came into the game and enjoyed some good spells of possession before Clifton won their first corner on 16 minutes. Williams' ball from the flag was met by Hendrie at the near post but he could only divert it behind for a goal kick.

Town's next chance came on 22 minutes after Preston ran down the left and crossed for Green, whose header was tipped over the bar for a corner by home keeper Lawrence Vigouroux.

And when the corner came in, the Mariners got their equaliser as the ball was met by WATERFALL and his header found the net.

Good play by the away side on 26 minutes led to Williams finding his way into the box but when he pulled the ball back, it was cleared by Dan Happe.

Another opportunity almost came when Vigouroux took too long to gather the ball and Green looked to pounce but the keeper eventually grabbed it at the second attempt.

Town were playing with plenty of confidence and they took the lead on 32 minutes. Windsor won possession just inside the Orient half and took it forward before playing a nice ball through for WILLIAMS, who beat Vigouroux with a low finish into the bottom corner.

Wilkinson's 20-yard chip at the other end was comfortably caught by McKeown, before Josh Wright was booked for a foul on Clifton after a home free-kick had been dealt with.

A Wilkinson cross was headed clear, then Clay and Sotiriou both saw shots blocked in quick succession as Orient looked to get themselves level before half-time.

A Town corner came after Clifton and Williams linked up well on the right as the half moved into three added minutes. Williams' ball was headed away for another corner on the opposite left flank but this time, the ball was punched clear by the keeper.

No further chances came before the referee's half-time whistle, meaning the Mariners held their 2-1 lead at the break.

Morton replaced Rose before the restart and the hosts were the first to attack, with Wilkinson making his way into the penalty area before being stopped by Waterfall.

A Wright corner was headed away, before a great run by Windsor down the left eventually did not lead to a chance as his cross failed to find a man in black and white.

An opportunity came when Preston sent a low ball across the six-yard line from the left but after it found its way to Clifton, he could only send it wide from a narrow-angle at the far post.

Windsor shot straight at Vigouroux from 25 yards, then a pull-back from Wilkinson at the other end led to Danny Johnson's shot being deflected behind for a corner.

Edwards was the second Town substitute to be sent on as he replaced Green on 62 minutes, with Jordan Maguire-Drew coming on in place of Wilkinson for the hosts at the same time.

Wright sent a dipping shot over the bar after spotting McKeown slightly off his line as a header dropped for him, with Orient doing most of the attacking but the Mariners still holding the advantage.

Clifton won a corner on 66 minutes after good play down the Town right but Williams' delivery curled out for a goal kick.

The second home substitution saw Jobi McAnuff come on for Jamie Turley and soon afterwards, a corner was dealt with by Taylor at the near post.

Grimsby's third and final change came on 69 minutes, with Gibson replacing Williams and forming a three-man attack alongside Williams and Windsor.

Pollock narrowly missed the target with a header from a free-kick, before an effort by Sotiriou was blocked at the other end.

Orient had looked brighter since the introduction of captain McAnuff and they were back level on 74 minutes. MAGUIRE-DREW beat Preston on the home right and cut into the box before shooting past McKeown and into the far bottom corner.

A foul on Edwards by Maguire-Drew gave Town an almost instant opportunity to restore their lead but Pollock's far-post header from Taylor's free-kick bounced back off the top of the bar.

Edwards almost got on the end of a short back-pass with nine minutes to go but Vigouroux was alert and raced off his line to beat the Bristol City loanee to the loose ball.

A pacy run by Edwards down the left took him into the box but Olatunji Akinola did well to get back and get the ball away for a corner, which did not lead to a chance in front of goal.

Clifton was booked for a foul on McAnuff on 86 minutes but the free-kick came to nothing.

And the Mariners were given a chance to win the game when Windsor was brought down by Clay inside the box after a strong run through the middle. As the clock moved into added time, GIBSON stepped up and confidently sent the keeper the wrong way to make it 3-2.

The away side were forced to see out three additional minutes and a home penalty claim for handball was waved away by the referee, with McAnuff yellow-carded for his protests.

Orient were unable to create any further chances and so it was left to the Mariners to celebrate earning all three points after another great performance.

Town now return to Blundell Park for their next game, at home to Harrogate Town on Tuesday.

Next Up: Harrogate Town 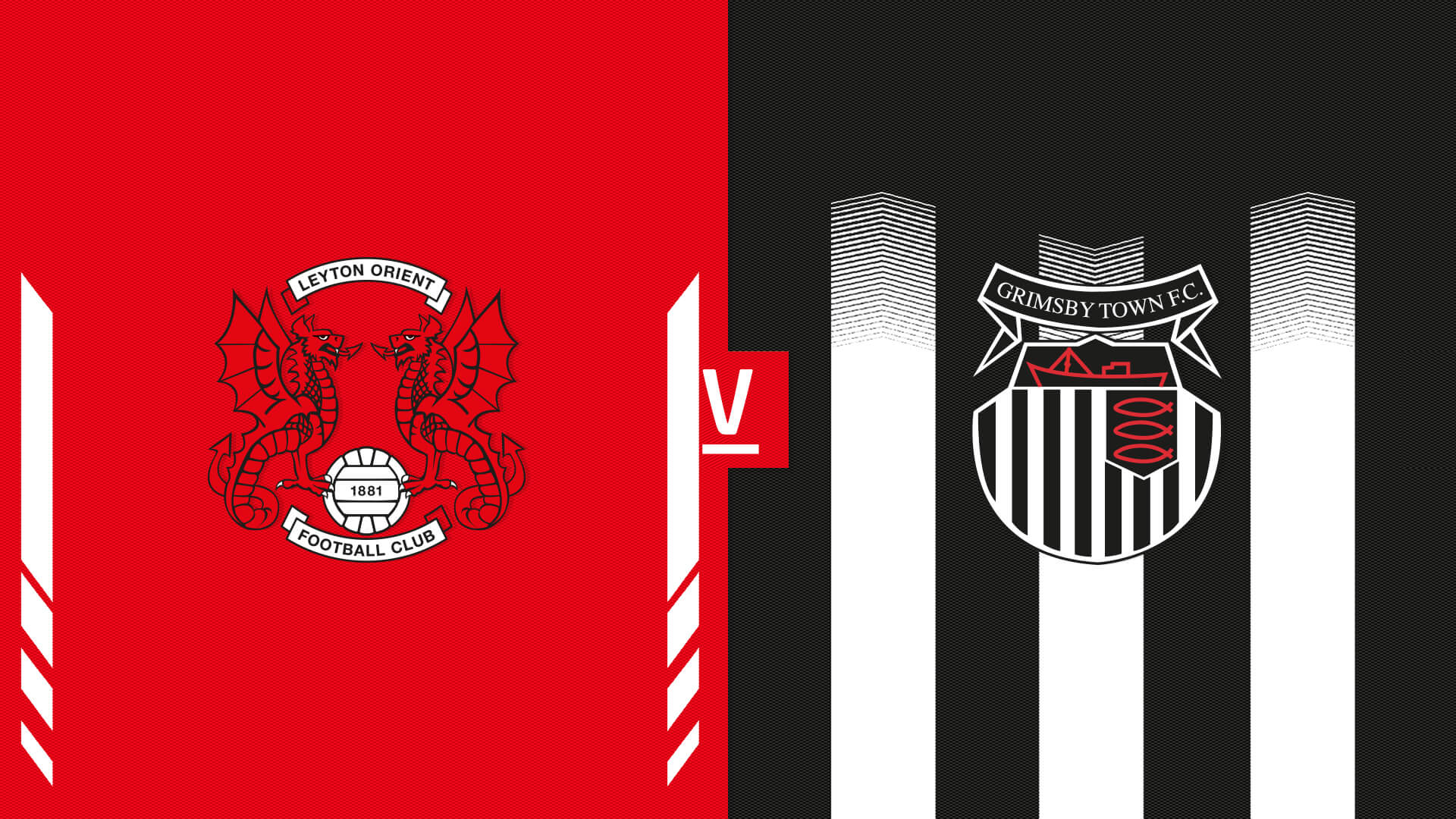 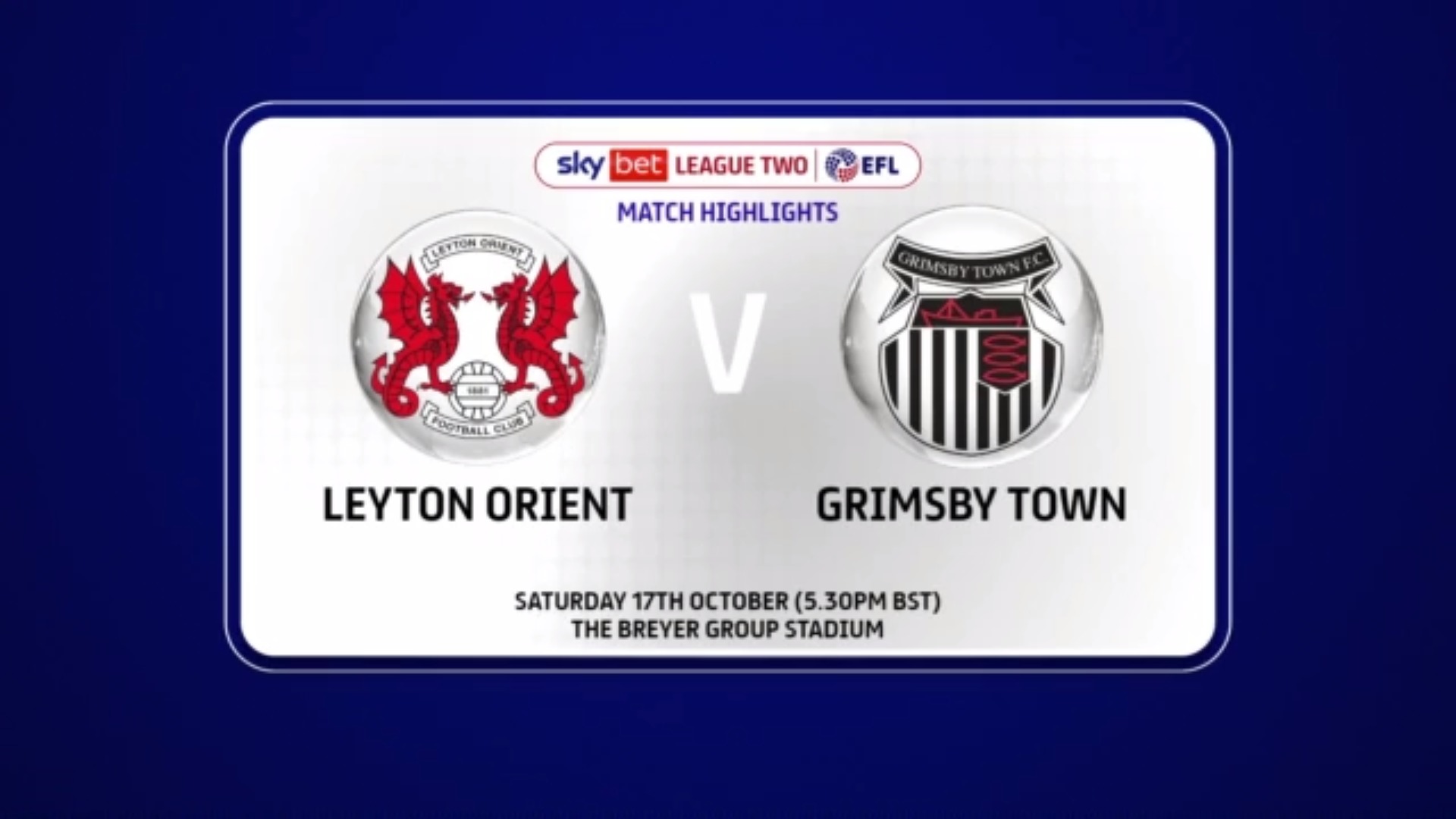 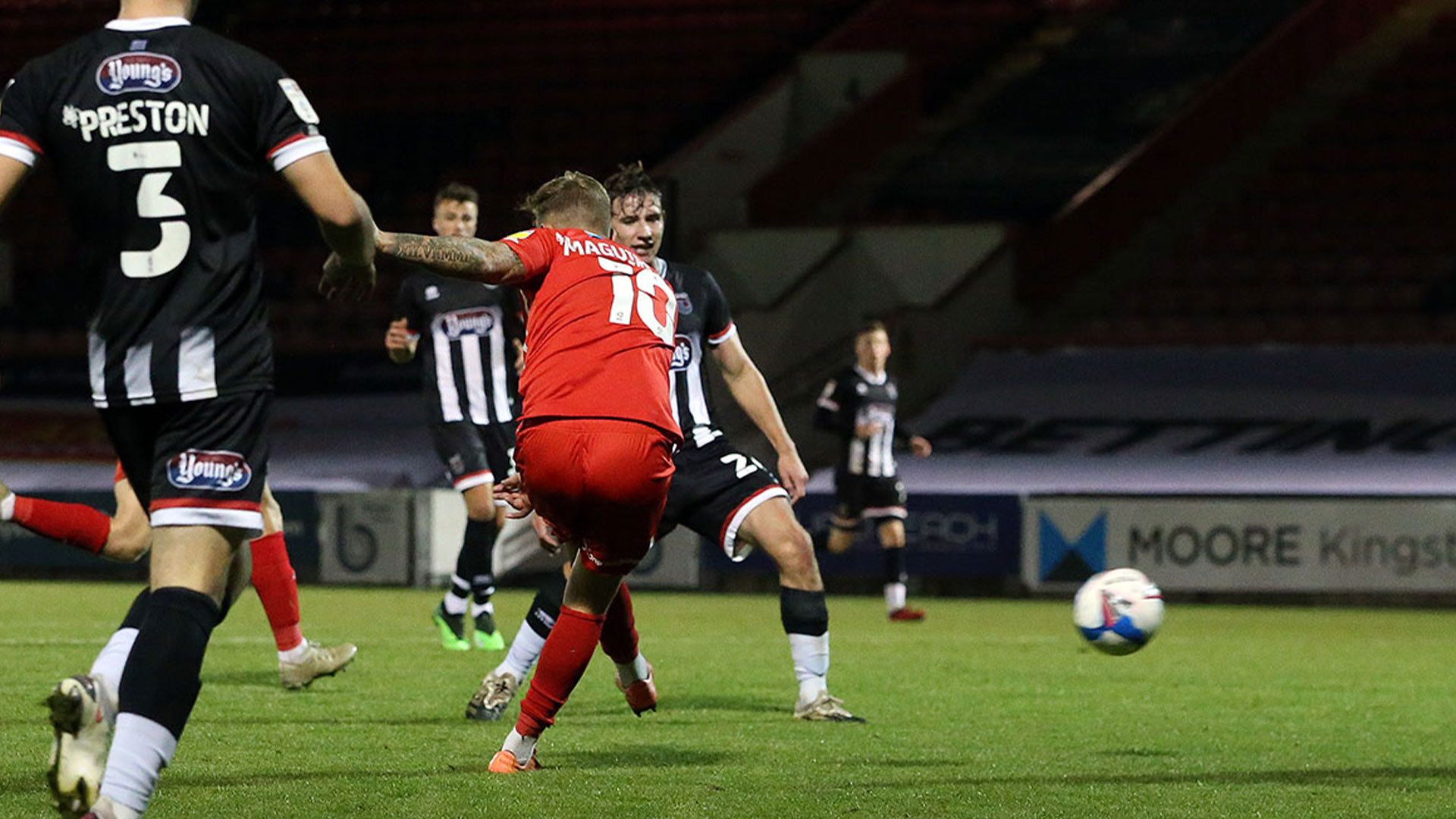